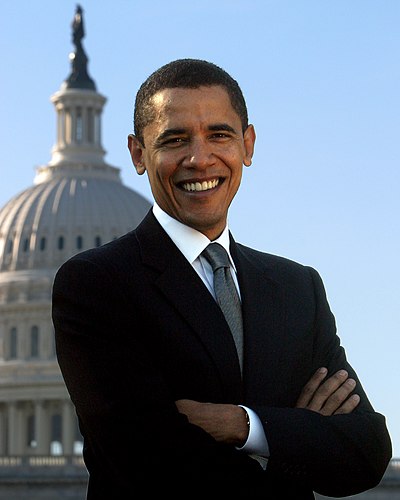 Totally not David Palmer at all.

Barack Obama was the 44th President of the United States of America, succeeding George W. Bush. Born in Honolulu to a white American mother and a Kenyan father, he spent his childhood in Indonesia and Hawaii before attending Harvard Law School and eventually settling in Chicago, where he worked as a community organizer and a college professor before being elected to the state Senate in 1996, and from there to the U.S. Senate in 2004.

He was relatively young (47 on taking office), he was also the first American president to be mixed-race (the son of a White mother and a Black father), and is cited as proof that the Civil Rights Movement has paid off.

His presidency is generally defined by two bills he backed and signed: The American Recovery and Reinvestment Act of 2009, better known as "the Obama stimulus", and the Patient Protection and Affordable Care Act, better known as ObamaCare. Both were massive bills, in excess of 1000 and 2000 pages respectively, and were frequently accused of not being read before they were signed, which was not helped by Majority Leader Nancy Pelosi's comment that "We have to pass the bill so that you can find out what is in it" in regards to the second. They were also expensive bills, totaling to a trillion dollars and adding more to the national debt than all previous Presidents combined.

The American Recovery and Reinvestment Act of 2009 was developed to "fix" an ailing economy. The bill seemed to have no clear focus and seemed purely to be an expensive collection of Democrat pork wish-lists. Despite all Republicans and 11 Democrats voting against the bill in the house, the "stimulus" was passed in the House. With only 3 Republican Senators voting for it in the Senate the bill quickly reached Obama where it was signed. The bill had no noticeable effect on the economy, and worse, a large portion of the money it direct had simply disappeared.

The Patient Protection and Affordable Care Act (Also from 2009) was claimed to fix Americas high health care costs. Passed with zero Republican votes, the bill was also passed over public objections. Opposition to the bill was not quieted by the the final senate vote being Al Franken, who had won his seat in a narrow victory under suspicious circumstances that invited accusations of voter fraud. The bill had the exact opposite of its claimed intent [1] and several people lost insurance or were forced to take lesser plans and new per employee costs to business repelled new jobs.

Anger over these bills would give Republicans control of the House and enough Senators to sustain a "filibuster" in the "mid-term" 2010 elections. Despite this Obama secured re-election in 2012, a factor of a weak and unpopular "moderate" Republican candidate in Mitt Romney and Obama's ability to bring out his supporters. An opposition effectively controlling both House and Senate should have rendered him a largely powerless President but Obama would go on to (ab)use a process known as "executive order" to effectively issue law unchallenged. A highly controversial approach even the Democrat leaning Saturday Night Live attacked. Repeal of Obamacare and reversal of Obama's executive orders would go on to be one of Donald Trump's major campaign promises.

Caricatures of Obama initially lacked any notable features over fear of being accessed of racism. Artists eventually settled on a tall, skinny man with huge ears (Ears Obama notes his daughters and black peers have mocked).

Retrieved from "https://allthetropes.org/w/index.php?title=Barack_Obama&oldid=1960248"
Categories:
Cookies help us deliver our services. By using our services, you agree to our use of cookies.