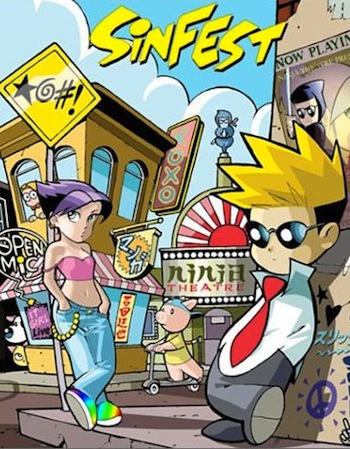 A festival of sin... or at least temptation.

Sinfest is a web comic by Tatsuya Ishida, an outgrowth of a strip he originally created for the UCLA college newspaper. The primary characters are Slick, a Calvin-esque teenaged "pimp" who's always trying to look as cool as he can, and his hot friend Monique, who spends her days fighting for feminist causes when she isn't flirting with hot guys (of whom Slick doesn't qualify).

Other characters include God and Satan, who still hold a silly grudge; Seymour, a religious zealot; Li'l Evil, a Satan zealot; Squigley, a pig who gets high all the time; Jesus; Buddha; The Dragon, an embodiment of Eastern religion; Percival and Pooch, the artist's cat-and-dog duo; and Criminy, the sheltered bookworm. They have surreal, metaphysical adventures that often involve Slick's high view of himself, Monique's oversexed behavior, Satan's desire to acquire their souls, and other goings-on.

The strip originally lived up to its name, playing with Dead Baby Comedy scenarios, drug humor, and subversive pokes at the nature of religion and morality, among other topics, usually with little or no regard for continuity. Over time, however, it's gotten softer and more mainstream. While still poking fun at religion and comfortable with language that won't play in newspapers, Tatsuya is now trying to show a world where most people are brainwashed by dominant culture and a Matrix-like patriarchy is responsible for most evils, most of which involve excessive consumerism, marketing of everything, male chauvinism, and just plain bad old intolerance. Longer story arcs have been introduced and playing above and beneath others, such as Criminy's platonic romance with one of Satan's hot succubi, and her conflicts as a result. Slick and Monique's obnoxious behavior has also been downplayed a lot—while they might not be a loving couple, they are friendly associates. Don't let the name fool you.

A rare example of a webcomic becoming Lighter and Softer, and good for anyone who wants to go on an Archive Binge, with over 5,400 strips! Indeed, it's one of the longest running webcomics on the net. (The first strip was posted on January 17, 2000. As of early-December 2021, it has updated daily since July 10, 2006.)

Tropes used in Sinfest include:

Retrieved from "https://allthetropes.org/w/index.php?title=Sinfest&oldid=1943927"
Categories:
Cookies help us deliver our services. By using our services, you agree to our use of cookies.