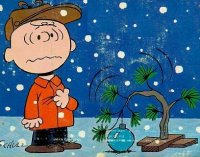 This is not a Christmas Special. This is the Christmas special.

Produced on the cheap and quick for CBS in 1965 (a careful viewer will notice that it's rife with animation errors due to its rushed production), this special has nonetheless gone on to become one of the most iconic Christmas works of all time. It's also one of the most successful of all time, having been reliably on TV from its debut to the modern day. In fact, if you're from a Christmas-celebrating household, chances are you've already watched this more times than you can count and we don't have to tell you anything. But then again, where's the fun in that?

The special is based around Charles Schulz's Peanuts characters. As is his wont, Charlie Brown is having a Very Butt Monkey holiday season: He's received no Christmas cards, he doesn't feel happy, and he's been roped into helping Lucy with her Christmas pageant. After he struggles with directing, she gives him a task: find the perfect Christmas tree for her play. Preferably aluminum and painted pink. Charlie Brown comes back with a twig of a sapling that's too tiny to even support the weight of a single ornament, and the kids' reaction causes him to wonder if anyone knows what Christmas is really all about.

Yes, that's the whole plot. And yes, the animation is cheesy to go with it.

And yet... there's a reason this 25-minute cartoon has been on TV every year for over half a century, and was the first of many specials focusing on the Peanuts gang.

Tropes used in A Charlie Brown Christmas include:
Retrieved from "https://allthetropes.org/w/index.php?title=A_Charlie_Brown_Christmas&oldid=1751702"
Categories:
Cookies help us deliver our services. By using our services, you agree to our use of cookies.