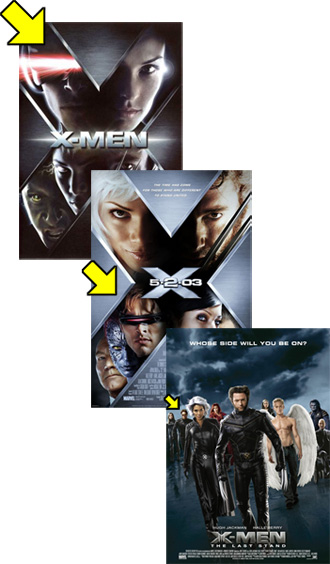 We have a member of the supporting cast. They're important to the plot. Although, like any other minor character, they fall Out of Focus at times. Then comes the sequel, or the adaptation, or The Movie, and... hey, where'd they go? They weren't completely written out, but they just weren't good enough to keep what importance they had in the original. The character's fanbase will complain, and everyone else may just accept it as the status quo. It's sad.

This always, always, always happens to The Chick and/or The One Guy when The Smurfette Principle put them in their roles; if not in the story, definitely in the merchandise.

Opposite of the Ascended Extra; instead of a background or one-off character becoming a key member of the supporting cast, a key member of the supporting cast becomes a background or one-off character. Also contrast Spotlight-Stealing Squad; there may not be anyone in particular that takes these characters' screentime, and the presence of a Spotlight Stealing Squad doesn't mean no one else is plot-important anymore. In works when Anyone Can Die, characters fated to die frequently end up demoted to extra before their deaths.

Compare Shoo Out the Clowns, Sir Not-Appearing-In-This-Trailer, Not as You Know Them, The Artifact, Out of Focus, What Happened to the Mouse?, Chuck Cunningham Syndrome, and Commuting on a Bus. Contrast Ascended Extra, Breakout Character and Ensemble Darkhorse.

There were more examples to this trope, but we had them cut out to save time. If you can see them, feel free to put them back on.

Examples of Demoted to Extra include:

Retrieved from "https://allthetropes.org/w/index.php?title=Demoted_to_Extra&oldid=1899546"
Categories:
Cookies help us deliver our services. By using our services, you agree to our use of cookies.