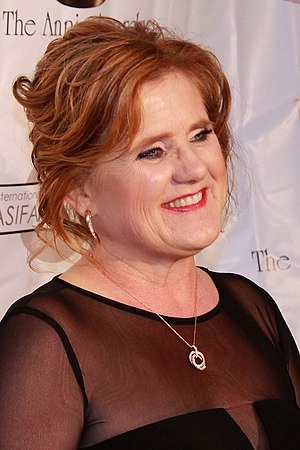 High school students in television look nothing like high school students in real life (well, not always), for one good reason: they're played by actors who are upwards of ten-to-fifteen years older. This dates back to the earliest days of Hollywood, if not further, making it Older Than Television.

Despite this trope being a prime source for ridicule, mockery, and parody, there are actually a lot of legitimate reasons this is done.

This ought to be horribly distracting, but by and large, television audiences have learned to manage. It can sometimes result in a paradoxical effect: teens that look more like actual teens (either with real teenage actors or in animation) are described as looking "too young" (see Reality Is Unrealistic). Conversely, actors in their early-to-mid-twenties, especially those who make their name in these kinds of shows, often have difficulty being taken seriously playing characters their own age.

This happens far most often when dealing with teenage characters in the range of 14–18 years old, especially in dramatic shows. If younger, casting usually tries for children actors, and if older it is simply far less noticeable. If a show or movie carries a greater focus on the adults rather than the kids then they will usually avert this.

Very specific actors can pull it off, usually attributing it to the character being Older Than They Look. In other cases, some stories work with this because a key plot point may be the character does not actually look their age, or because the actor looks younger (for example many do not realize Sissy Spacek was not actually a teen in Carrie). But with no such luck Hollywood will get by with appropriate clothing, hairstyles, makeup and mannerisms.

Named for Dawson's Creek, which was notorious for it—James Van Der Beek (20), Katie Holmes (18) and Joshua Jackson (19) playing 15-year-olds (at the time of the pilot's filming). 17-year-old Michelle Williams was the only one still high school aged.

The below ages are generally at the time the movie was released or the first episode aired; the actors are of course younger during filming. Simply put, a 20-year-old does not physically look like a 14-year-old.

And because voice acting has nothing to do with appearance and everything to do with vocal performance, only notable aversions should be mentioned in that regard (it would be like complaining they didn't get an actual alien to voice an alien). Likewise, this is intended primarily towards adults playing teenagers and not about simple age discrepancies. There's a good explanation for why this may be done for voice acting, too - having actual children to voice actual child characters is sometimes complicated because kids age, have their own lives ahead of them, enter puberty (and voices change) etc. This is also part of why we have Cross-Dressing Voices - see below.

Compare Age Lift, Age-Inappropriate Dress, Hollywood Old and Playing Hamlet. Contrast Playing Gertrude and Not Allowed to Grow Up. See also Artistic Age for an intentional drawn equivalent. Cross-Dressing Voices is more-or-less the animated version of this trope, as partially explained above.

Examples of Dawson Casting include:

Retrieved from "https://allthetropes.org/w/index.php?title=Dawson_Casting&oldid=1864941"
Categories:
Cookies help us deliver our services. By using our services, you agree to our use of cookies.