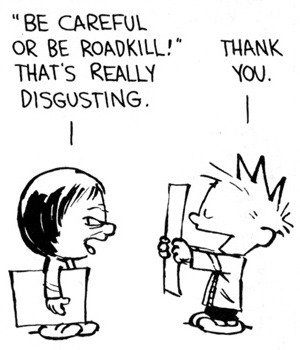 "What is that splattered all over the drawing?" "Chunky spaghetti sauce!"

A verbal equivalent of Attack Backfire, this is for when character A comments on a trait of character B's in a way that's intended to sound negative—but instead of being insulted, character B feels flattered.

Usually, this is because character B feels the "insulting" trait is actually a virtue that they have been trying to cultivate. Less commonly, they're The Ditz or have a poor grasp of the word or concept being insulted and take it to be a positive comment. Other times, it's simply a case of character B having the attitude of pretending that it's not an insult, or even turning it back on character A: "Coming from you, I'll take that as a compliment."

A variant is for the character to be insulted, not because they dislike what was said, but because they're obviously so much worse than that.

Occasionally, the insult backfires because A's remarks were insulting on the surface, but B carries them to their logical, ultimately complimentary conclusion. These cases typically only work when the original insult was mild and/or non-malicious to begin with.

Related to Stealth Insult, but different in that an Insult Backfire is accidental and a Stealth Insult is sent over the target's head on purpose. Sometimes, it seems the only sure way to insult someones is to give them a compliment.

Not to be confused with Insult Misfire, where the target obliviously doesn't realize the insult was directed at them. Compare Threat Backfire. Compare and contrast I Take Offense to That Last One, where there are multiple insults, but the character may only object to one of them. See also Blunt Yes, which is often based on a similar theme. Contrast Compliment Backfire. See also Insult Friendly Fire.

See also I Take Offense to That Last One, I Resemble That Remark, Card-Carrying Villain, Tall, Dark and Snarky and It's What I Do. If the insultee adopts the insult as an actual badge of identity, it becomes an Appropriated Appellation. Compare Geeky Turn On, I Would Say If I Could Say, Arson, Murder, and Admiration, and Blunt Yes. Sometimes crosses paths with Misaimed Fandom. The complete opposite of Your Approval Fills Me with Shame.

Examples of Insult Backfire include:

Retrieved from "https://allthetropes.org/w/index.php?title=Insult_Backfire&oldid=1927272"
Categories:
Cookies help us deliver our services. By using our services, you agree to our use of cookies.