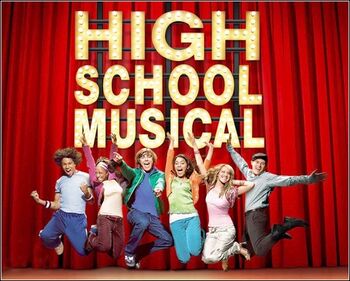 We're all in this together...

A Disney Channel Original Movie which has become phenomenally popular, especially with tween girls. Among others.

Basically it is a Musical set in a High School about the people trying out for their High School Musical and School Teams. With a Boy Meets Girl plot and an Alpha Bitchy antagonist. Lather, rinse and repeat.

This movie spawned two sequels, one of which was released theatrically, and a Spin-Off movie, titled Sharpay's Fabulous Adventure starring, of course, Ashley Tisdale as Sharpay. There is also a Glee-esque Spin-Off TV show in the works[when?], Madison High, where Mrs. Darbus relocates from East High to teach at a new high school.

The franchise also has Spiritual Successors: The major one being Camp Rock, the minor ones being Starstruck and Lemonade Mouth.

Tropes used in High School Musical include:
Retrieved from "https://allthetropes.org/w/index.php?title=High_School_Musical&oldid=1730528"
Categories:
Cookies help us deliver our services. By using our services, you agree to our use of cookies.