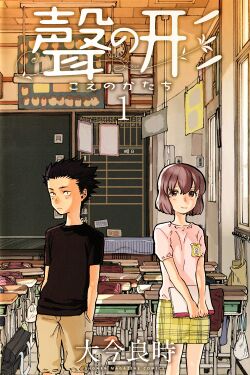 Shouya Ishida is your typical boy, if a little rebellious. He loathes boredom, and do things like jumping off a bridge in the river to not get bored.

One day, a new classmate arrives his class: a girl called Shouko Nishiniya. When the teacher asks her to talk, she doesn't talk. Instead, she uses a notebook to tell them four things: her name, that she hopes to be a friend for everyone, that they could use the notebook to communicate with her, and that she's deaf.

The changes that Shouko causes through her condition in the class soon drives almost the entire class against her, including Shouya, that is soon taken as the The Scapegoat by the others for mistreating Shouko. Shouya ends up blaming this on Shouko herself, fights with her, and as result she is transferred. After she goes away, Shouya soons discovers she was cleaning his desk full of insults against him by the other students. As the years passes, he isolates himself and is isolated by the other students, and regrets more and more his actions against Shouko.

Five years after that day, Shouya meets Shouko again, and tries to make amends by what he did....

Writing and Art by Yoshitoki Ooma. Serialized on Kodansha's Weekly Shōnen Magazine. An animated film adaptation for this manga produced by Kyoto Animation was premiered in September 17, 2016.

Tropes used in A Silent Voice include:
Retrieved from "https://allthetropes.org/w/index.php?title=A_Silent_Voice&oldid=1724778"
Categories: