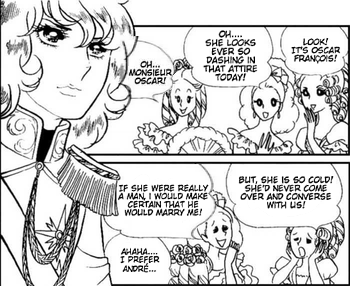 Bifauxnen -- bringing romance and excitement to your life since the French revolution.

A female character who resembles a pretty, androgynous boy but in a positive fetishistic way, usually coupled with an appropriate 'masculine' outfit of varying conceivability depending on the artwork. Swooned over by confused females as much as outright Schoolgirl Lesbians. Sometimes in the episode they're introduced, they're confused for men until the other characters recognize and treat them as girls. Occasionally, it's also a roundabout way of adding a stereotypically 'male' role to a show that doesn't have (or want) one. Very often subject to at least one Stupid Sexy Flanders gag, sometimes even after The Reveal of their true biological sex.

Interestingly, most versions are Prince Charming types and overwhelmingly 'good' characters. Bifauxnen are, from an artistic standpoint, everything that is positive about masculinity while also not losing anything fundamentally 'woman'. Many characters, in fact, simply heavily associate with traits typically praised in men; the appearance is just another path to that. Most of the time the Bifauxnen is not a Butch Lesbian, and is mostly oblivious to reactions they incite.

The major distinction between them and Tomboys is a direct association with elegance and style, and they often appear older than they really are. Tomboys are often associated with playfulness and immaturity, but are still clearly female.

Bifauxen, however, do not include trans men, as the latter are men (mentally if not physically) and not simply 'mistaken' for men. Usually they can be distinguished by how they identify, such as Takatsuki from Wandering Son.

This is mainly a Japanese trope. Western examples do exist, dressing this way either throughout a work or in a single scene, but the Western example is generally not straight. Rather, dressing a female character up as a Sharp-Dressed Man was, in European and North American works in the nineteenth and twentieth centuries, a standard Getting Crap Past the Radar way to imply that she was lesbian or bisexual when open acknowledgement and depiction of her sexuality would have been forbidden by taste-and-decency standards.

A subtrope of Lady Looks Like a Dude. The male equivalent is Dude Looks Like a Lady. Not to be confused with Sweet Polly Oliver, who only dresses like a man to achieve a goal that requires her to seem male. Compare to Samus Is a Girl, where the gender simply isn't discernible until The Reveal. Can also be a case of Bifauxnen and Ladette if there's more than one in a particular work or Everybody Wants the Hermaphrodite if she just happens to have a few male bits in the end. Also see The Ladette and Attractive Bent Gender. May involve a Gender Reveal.

The movie's case, being a rather compact..."retelling," it seems that she purposefully dresses as a Bifauxnen, and starts off acting rather suave about it, making it less clear how she views people thinking of her as masculine.

Retrieved from "https://allthetropes.org/w/index.php?title=Bifauxnen&oldid=1921044"
Categories:
Cookies help us deliver our services. By using our services, you agree to our use of cookies.