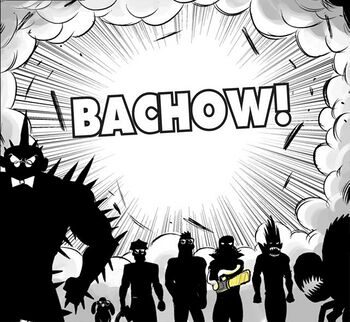 Axe Cop blows things up, and then walks away.

Cool guys don't look at explosions
They blow things up and then walk away
Who's got time to watch an explosion?
There's cool guy errands that they have to walk to

When just blowing something up isn't enough, proof of one's apparent badass bombing technique can be seen when the bomber leaves himself barely enough time to escape the blast radius, usually just enough so that as he's walking away, he's silhouetted by the explosion itself.

While explosions are the most common thing to walk away from without looking or reacting to, any sufficiently spectacular or violent event (such as a battle, a vehicle crash, a building collapsing, etc.) can also count, as long as the one walking away was connected to the event and the event is usually something that would be expected to draw attention, or at least attempts to take cover.

Can be combined with a Power Walk for extra badassitude. Compare Outrun the Fireball when this is done running. When the character was in the fireball, and still pulls this off, that's usually a sign that they're an Implacable Man or The Juggernaut.

Examples of Unflinching Walk include:

Traitor: Where are you going?
Teal'c: I am leaving. You are about to explode.

Guerrero:He's my world. You understand? That's my kid.

Gibbs: "You might want to-"
Trailer explodes, Tony and Kate duck.
Gibbs, smiling: "Cover your ears."

Hey, look at me, casually
Walking away Stumbling down like Action Movie Hero Boy Blooper Reel
In slow-mo, everything glowing
And blowing to bits right behind including me!

"He did it! And he's not looking back at that cool explosion, he's a hero!"