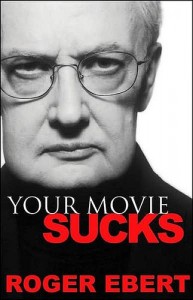 Spoken in his official capacity as a Pulitzer Prize winner.

On paper, the job of a reviewer of any medium is to provide an evaluation of a given work in the medium, outlining its good and bad points and whether you should check it out. Useful, succinct, and an integral part of any entertainment industry.

Doesn't mean you have to be nice about it.

Enter the Caustic Critic, whose job it is not only to review the work in question, but also to call it names until it cries like a little girl. Why? Because it's funny. That said, the Caustic Critic is almost always rather divisive, especially when he takes on a generally well-liked game / show/ movie/ album/ book/ manga/ anime/ webcomic/ webcartoon/ fanfic/ platypus.

They need not necessarily be reviewers; they might be essayists discussing trends, but the spirit is the same.

Also note that some (perhaps even many) of the below examples do have human moments where they admit some of the things they review aren't all that terrible (or may even have special segments dedicated to positive commentary!).

Alternately, as the above quote implies, a usually constructive critic is tempted to bring out the sarcasm guns by a unusually bad work or product.

Compare Sturgeon's Law, which might either be the cause or the result of these critics (or both). See also Straw Critic and Accentuate the Negative. The Mean Brit is a Caustic Critic who gives immediate feedback in a competition setting, even if you're ten years old and your eyes shine with hope.

Not to be confused with Complaining About Shows You Don't Like.

Examples of Caustic Critic include:

Retrieved from "https://allthetropes.org/w/index.php?title=Caustic_Critic&oldid=1760345"
Categories:
Cookies help us deliver our services. By using our services, you agree to our use of cookies.