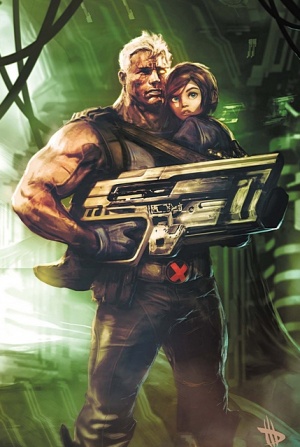 Get away from her, you SON OF A BITCH!

The Spear Counterpart to Mama Bear, though it should be noted that wolves are led by both males and females.

He may be normally a Bumbling Dad and a Non-Action Guy, but threaten his kids, and you'll soon wish you'd never messed with him. A Papa Wolf is always portrayed heroically in contrast to many an Overprotective Dad. A Team Dad may display a streak of this, but the Papa is more likely to be related to his children by blood or through formal adoption, and the children tend to be younger, which may be part of why the Papa Wolf is more oriented toward protecting them rather than training them to defend themselves (though even completely grown children can summon this response in the face of crisis.) He, furthermore, tends to be less affectionate than Mama Bear under normal circumstances. Often, his fierce reaction to injury to his children is presaged by his normal manner, providing for and protecting his family under ordinary circumstances—however bumblingly.

Note that a Mama Bear tends to be the mother of The Hero (or another main character) while the Papa Wolf tends to be The Hero or a main character himself. Also, unlike Mama Bear incidents, Papa Wolf occasions serve as a way for a father to prove his worthiness. (See A Real Man Is a Killer). Expect his children to have a newfound respect for their father, and for their previously strained relationship to improve. After all, a father who beats the crap out of people is cool. Mothers who do that, on the other hand, are kind of scary (but also often cool).

Furthermore, for fathers there is more of an expectation that they will attempt to protect their children, it's just that nobody expects them to be any good at it. Half the time it's more the competence that is surprising, rather than the defensive act itself. Often Papa Wolf incidents serve as a way to reveal the father is really a Retired Badass. This is often a revelation to his children as they thought he was a Non-Action Guy.

When Mama Bear and Papa Wolf team up (surprisingly rare) you are screwed.

Not named "Papa Bear" (sorry, Stephen Colbert) because in Real Life, bears do not make very good fathers. Plus, it also happens to be the name of a certain Bumbling Dad in a children's book series. The male wolves, on the other hand, will react to their offspring or mate being threatened in very much the same way a female bear will. Plus, they are big and badass.

Subtrope of Beware the Nice Ones. See also A Father to His Men. Combining this with Disproportionate Retribution can lead to a Knight Templar Parent. If the guy is a teacher instead, he's a Badass Teacher. If the guy doing this is a sibling/cousin you get Big Brother Instinct. Inversely, see Parents in Distress for the kids rescuing the dad. Evil characters can use this too; after all, Even Evil Has Loved Ones. A subtrope of the Papa Wolf is the Badass and Child Duo, where an adult male badass takes it upon himself to protect an orphaned, unrelated young child who is usually a girl.

Remember when adding examples that this is a male only trope. The female equivalent is "Mama Bear" so all female examples should be placed there.

Examples of Papa Wolf are listed on these subpages:
Retrieved from "https://allthetropes.org/w/index.php?title=Papa_Wolf&oldid=1945561"
Categories:
Cookies help us deliver our services. By using our services, you agree to our use of cookies.