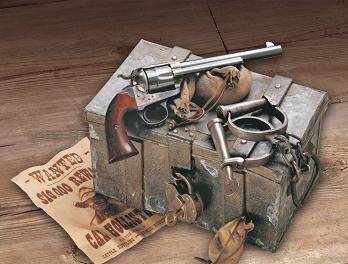 Perhaps surprisingly, the Western genre is Older Than They Think; in fact, it predates the classic Western era. It has its roots in the early 19th century novels of James Fenimore Cooper (set in the then-frontier, which was well east of the Mississippi at the time) and his imitators, as well as 19th century "dime novels"—meaning that, like the gangster films of The Thirties, the genre was originally pretty much contemporary with its source material. In fact no less a figure than Wild Bill Hickok was already a star in dozens of embellished stories by the time he died in 1876. By the turn of the century a lot of the stock Western tropes had already been established in popular imagination: see Western Characters.

Westerns made a very early leap to film with The Great Train Robbery in 1903, and remained popular throughout the next few decades, though their golden age truly arrived in the 1930s.

Enormously popular on TV and in the Movies in the 1950s and 1960s: Gunsmoke, Bonanza, Wagon Train, Rawhide, Branded, The Wild Wild West, Have Gun — Will Travel, The Rifleman, The Big Valley...

Some of the more recent successful TV examples were Grizzly Adams and Dr. Quinn, Medicine Woman.

Common plotlines include a Cattle Drive, a Train Job, and a Bank Robbery.

There's a Wanted Poster on every wall and it's more savage the further south you go.

There's an important distinction between the "classic" Western (The Lone Ranger-type stuff) and the "revisionist" Western (High Noon, The Searchers, the Dollars trilogy, The Wild Bunch, McCabe and Mrs. Miller, Unforgiven). The former is shiny and heroic. The latter is Darker and Edgier, and often embodies a paradox: "Civilization can only be defended from barbarians by men with guns, but once you pick up a gun, you are a barbarian." In the 21st century, the distinction seems fuzzy, as most of the "best" (or at least, most fondly-remembered) Westerns are the revisionist ones—and therefore they are now seen as the core of the genre.

In recent decades the genre was only seen on TV in the form of its hybrid child the Space Western, but it is now enjoying something of a revival with the success of Deadwood in 2004. Two networks, according to the British Radio Times, have new series in development.

The Western is usually set on the American frontier, but sometimes go farther afield to places like Alaska (North to Alaska, The Far Country), Mexico (The Wild Bunch, Vera Cruz, The Professionals), and Australia (The Proposition, Quigley Down Under).

In terms of time, the genre's heyday (as stated above) is a 25-year span in the 19th century, but there are examples set earlier (Drums Along the Mohawk takes place at a time when upstate New York was frontier country) and later into the early 20th century (Sam Peckinpah's The Ballad of Cable Hogue ends with the title character getting hit by a car). For series that use Western tropes but are set in the modern day, see New Old West.

A subtrope of Period Piece. See also Western Characters and Spaghetti Western. Also a reason why most people believe All Deserts Have Cacti - the majority of Westerns were filmed at Kirk's Rock.

When a series that isn't The Western visits The Wild West or borrows heavily from its imagery for a story, it's a Cowboy Episode.

Examples of The Western include:

Retrieved from "https://allthetropes.org/w/index.php?title=The_Western&oldid=1557345"
Categories:
Cookies help us deliver our services. By using our services, you agree to our use of cookies.