Royals Who Actually Do Something 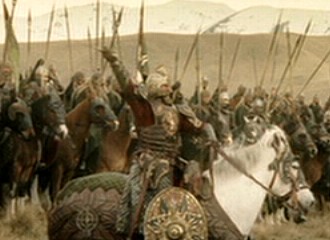 Theoden, King, leads the charge of the Riders to save Minas Tirith.

Due to the Ermine Cape Effect, Everything's Better with Princesses, and other such tropes, there is a belief that being royalty means doing almost nothing else but, well, being royalty. Aside from all the pomp, ceremony, galas, balls, intrigue, and the occasional dealing with actual government of the country, royalty just doesn't do anything else with their time.

This has some Truth in Television, such as the court at Versailles or the Forbidden City in China,[1] but not uniformly so. Just as often as not, royalty would actually do something worthwhile with their time. For centuries from prehistoric Mesopotamia through to the Middle Ages, kings were expected to be strong warriors to defend their holdings and inspire the men around them; in fact, "strong man who can lead the other men of the village in fighting off enemies" was probably the original meaning of kingship. Three examples are Alexander The Great, Charlemagne and Genghis Khan, kings who gained and kept their power through their skills as generals and warriors and, in the case of the latter two, administrators.[2]

This convention also led to the establishment of the feudal system. It was actually a deal between the king, nobles, and serfs (though for the serfs it was usually an offer they couldn't refuse). The serfs would work on the land owned by their lords, and the lords would train to be warriors (aka, knights), who would defend the kingdom against invaders, like the Vikings.[3]

Either way, being royalty does not necessarily mean a life of leisure or boredom (depending on how you view it). And fiction occasionally nods to this.

Note that this trope means that the person is still acting as royalty, just doing other things. So a Rebellious Princess does not count, since she is getting away from that kind of life. King Incognito may count, if the king is attempting to learn things to influence how he reigns; to do it for fun, even if it proves educational, does not count.

It should also be noted that much of the "activities" done by royalty (charity events, sport, arts, etc.) are enabled by their being part of the idle rich, instead of having to work for a living. Also, especially in the case of charity events and good causes, this is often a calculated public relations maneuver, which is not to say that it makes the activities any less of a good impact, there are simply multiple reasons for said activities.

The French have a phrase for this: Noblesse Oblige. It means that the nobility should fulfill the responsibilities of their position.

See also In Its Hour of Need.

Contrast Idle Rich, The Pirates Who Don't Do Anything, Authority in Name Only, Orcus on His Throne, Adipose Rex.

Examples of Royals Who Actually Do Something include:

Retrieved from "https://allthetropes.org/w/index.php?title=Royals_Who_Actually_Do_Something&oldid=1959726"
Categories:
Cookies help us deliver our services. By using our services, you agree to our use of cookies.