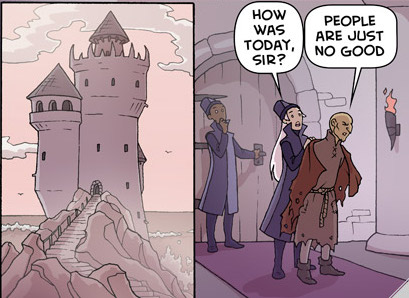 A special case of Chekhov's Gunman. The heroes and/or villains run into a seemingly unimportant person, usually a beggar or common criminal. Later we discover this person is actually someone of great fame and importance (a king/powerful wizard, etc), and that he/she had disguised him/herself to walk among the general populace unnoticed.

This may be a Rags to Royalty situation, if the king must stay hidden for his own safety. However, it is never a case of a Secret Legacy; the king always knows that he is the king, and is generally plotting for when the Rightful King Returns, or has been using a Decoy Leader to rule. If the central character is the King Incognito, then this is I Am Who?.

Frequently serves as a Deus Ex Machina, or can lead to a Right in Front of Me moment. Kneel Before Frodo often results. Is often a cause (or side effect) of an Emergency Impersonation. God Was My Co-Pilot and Angel Unaware are the supernatural versions of this trope.

If this character isn't that good at passing for common, he may be Rich in Dollars, Poor In Sense.

Examples of King Incognito include:

Retrieved from "https://allthetropes.org/w/index.php?title=King_Incognito&oldid=1918979"
Categories:
Cookies help us deliver our services. By using our services, you agree to our use of cookies.