Everything About Fiction You Never Wanted to Know.
Jump to navigation Jump to search
/wiki/Cate Blanchettcreator 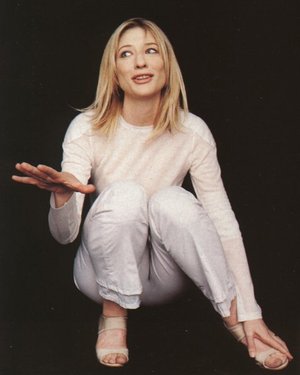 Cate Blanchett (1969 - present) is an award-winning Australian actress and stage director who burst onto the international stage in 1998 in an Oscar-nominated performance as Queen Elizabeth I in Elizabeth.

Her highest-profile role since has been that of the elf queen Galadriel in Peter Jackson's Lord of the Rings trilogy, but she has also played Bob Dylan in I'm Not There, Daisy in The Curious Case of Benjamin Button, Katharine Hepburn in The Aviator opposite Leonardo DiCaprio (for which she won an Academy Award for Best Supporting Actress, making her the first actor to win an Oscar for playing a real-life Oscar winner), Sheba Hart in Notes on a Scandal with Judi Dench, the completely awesome Maid Marian Lady Marion Loxley in Robin Hood (2010 film) and an oddly sexy Russian scientist.

She is known for her smoky voice and ethereal, almost elfin face as well as her tremendous talent and ability with accents. Meryl Streep has listed her as one of her favorite actresses currently working, and she has been called multiple times "the greatest actress of her generation."

Cate: He thought I was aloof and I thought he was arrogant.... but once he kissed me that was that.