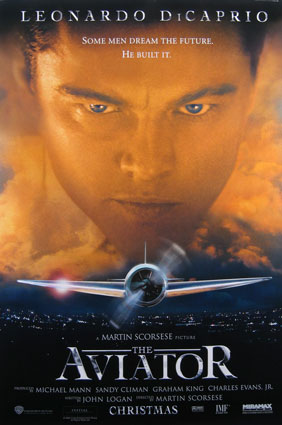 The Aviator is a 2004 biopic about Howard Hughes, a 20th century industrialist, film producer/director... and, well, aviator. Martin Scorsese directed it, and Leonardo DiCaprio stars as the titular character; the film also features Cate Blanchett (in her Academy Award winning role), Kate Beckinsale, and a bunch of really famous people playing other famous people.

The story documents the production of 1930's Hell's Angels, Hughes's relationship with Katharine Hepburn, and his ever-worsening obsessive-compulsive disorder. It won five out of eleven Oscar nominations, including Best Supporting Actress.

Tropes used in The Aviator include:

Glenn Odekirk: Howard, you really think they're gonna let you put out a whole movie just about tits?
Howard Hughes: Sure. Who doesn't like tits?

Howard: Hey Odie! Take it easy!" (after telling him to fire a janitor because he was staring at him)