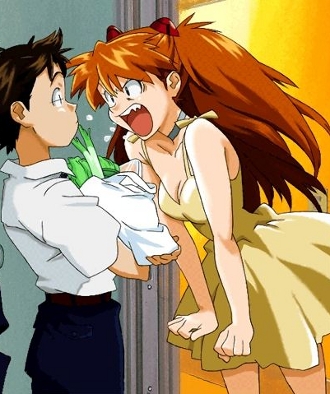 In Hollywood, you have your Dumb Blondes, your Brainy Brunettes... and your Fiery Redheads.

A Fiery Redhead is a red-haired character who is strong, passionate, outgoing, usually outspoken, and almost always female. She has a big personality and she's not afraid to use it. Whatever you do, don't get on her bad side, or there will be hell to pay. (Especially if Personality Powers are present: she likes Playing with Fire.)She will be unladylike unless it's the rare case of a redheaded Spirited Young Lady. She might be One of the Boys, a Tomboy, or a lad-ette. Heroes might like redheads, but when it's an issue, redheads tend not to like their looks.

This hair-color stereotype probably developed since red hair was associated with the Irish for a long time, and Irish people ended up being stereotyped as loud, strong, and passionate. Maureen O'Hara was practically the embodiment of this stereotype and probably did a lot to spread it. On the other hand, it's even found in Eastern Europe where any association would have been with Russians or Swedes, nationalities not generally stereotyped as hotheaded.

In addition to this, it extends even into ancient texts from Babylonian and Scandinavian Oral Historian. In The Edda Prose, Odin is depicted as blonde, green-eyed, cool, and calculating - while his son, Thor, is a redheaded, blue-eyed (something of an omen of war/perfection in Scandinavian culture) fire-breathing stereotypical Viking (the raiding kind) who treats Earth as a giant freshman mixer. Gilgamesh is also a Fiery Redhead with blue eyes whose duties include...well...being a good precursor to Thor, for the most part - though with more reservation and a cooling trend near the end of his life (this makes both an eerie paradigm of Fiery Redheads at the creation of their respective peoples' writings). The whole "red-haired, blue-eyed" thing is usually split in Japan between two people.

Although real redheads can have Green Eyes, this association is exaggerated in fiction.

Compare Heroes Want Redheads, Dark-Skinned Redhead, Evil Redheads, Rose-Haired Girl, Redheaded Stepchild, and Redheaded Hero. In anime, could be a Shana Clone. If you have a blonde, a brunette, and a redhead in close proximity (i.e. in the main cast), it's Blonde, Brunette, Redhead. Contrast Shy Blue-Haired Girl for Red Oni, Blue Oni.

Please do not confuse this with a redhead being literally fiery, although the two tropes sometimes overlap.

Examples of Fiery Redhead include:

Retrieved from "https://allthetropes.org/w/index.php?title=Fiery_Redhead&oldid=1961517"
Categories:
Cookies help us deliver our services. By using our services, you agree to our use of cookies.