Everything About Fiction You Never Wanted to Know.
Jump to navigation Jump to search
/wiki/Depeche Modecreator 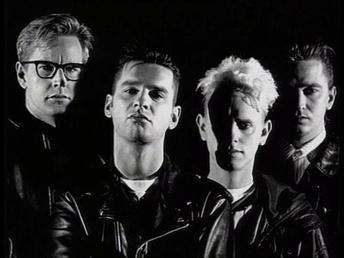 Depeche Mode are a British group formed in 1980 in Basildon, Essex. Initially a bouncy Synth Pop group, their songs later took on a darker, more sexual tone as they developed. Their Gothic aesthetic and innovative synth work brought them to worldwide fame in 1990 with the release of Violator, which has made it onto Rolling Stone's "500 Greatest Albums Of All Time" list. They've also been frequently cited as a key influence by Industrial Metal bands, especially Nine Inch Nails.