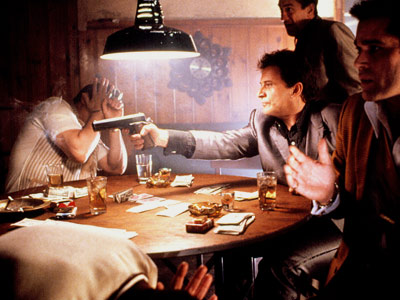 Dude, he brought you your drink. What more do you want?

A character with a hair-trigger temper flies into a rage at the slightest provocation. Masters of Disproportionate Retribution, they react explosively to the slightest annoyance. Unlike someone with a Berserk Button, who is generally calm unless their specific button is pressed, characters with a hair-trigger temper can be set off by anything. This makes them far less predictable—and far more dangerous to any poor sod who doesn't know what they're dealing with.

Characters with a hair-trigger temper are generally grumpy to everybody, but they usually have a favorite victim for their rampages—often a Naive Newcomer who doesn't understand how they keep managing to offend the guy. This can be harmful to the victim's health—while heroic characters generally restrain themselves to verbal abuse, Anti-Villainous ones can get physically violent, and out-and-out Villainous ones may even kill people for annoying them. However, such characters are essentially bullies—if someone tougher or higher ranked than them tells them to knock it off, they probably will.

Some of these characters are sufferers of Intermittent Explosive Disorder, a mood disorder characterized by disproportionate and often extreme levels of anger. Others deliberately act this way because they want to bully and intimidate others or are spoiling for a fight. The very worst of them have even worse problems than poor anger management.

Compare Drama Queen (who acts dramatic at the drop of a hat).

Contrast Extreme Doormat (who will not respond angrily to anything), Passive-Aggressive Kombat, Rage Breaking Point.

Examples of Hair-Trigger Temper include:

When Ichigo calls him by his name without any honorifics, he lets it slide with only a small complaint, causing the other captains present to comment that he must be in a very good mood to be so lenient.

Which makes it hilarious that his lieutenant happens to be a ditzy, tantrum-throwing, superhero-imitating girl who is either ridiculously cheerful or freaking out over trivial things like sesame-topped rice balls. Characters who hurt her, though, regret it.

Retrieved from "https://allthetropes.org/w/index.php?title=Hair-Trigger_Temper&oldid=1861011"
Categories:
Cookies help us deliver our services. By using our services, you agree to our use of cookies.