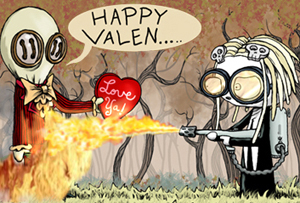 And he would do anything for her. Even stand her hot, burning fire.

A character devotedly in love with someone who is highly troubled or dislikable, the kind of person very few in real life would stick with. The love interest isn't merely a Jerk with a Heart of Gold or even Troubled but Cute: he/she (both sexes can play the Love Martyr role) has serious psychological issues and/or an utterly Jerkass personality which aren't exactly indicators of a healthy relationship.

The Love Martyr is fully aware of their beloved's faults, but willingly endures the insults and troubles they dish out because the Love Martyr believes their unconditional love is enough for both of them and/or strong enough to reform their beloved into a better person. What separates the Love Martyr from the Mad Lover is that the two do get into a relationship, albeit a twisted one, and the love interest is usually said or implied to love them back underneath it all, but the beloved's negative traits outnumber their positive ones to such an extent that their alleged love comes off as more of an Informed Ability than anything. Very often, others will point out to the character that the beloved would make a bad boyfriend or girlfriend, which the Love Martyr will ignore or argue against.

The Love Martyr is supposed to showcase the kind of pure and selfless love that can bring out the good side in even the most damaged and embittered people. If the love interest does show enough redeeming qualities at the start and believably develops into a decent person, the relationship can evolve into a Defrosting Ice Queen and/or a genuine Love Redeems scenario. However, the less evidence that is given of the base goodness or reform capability of the love interest, the less convincing the Rule of Romantic becomes, and the more it seems that the character is only sacrificing himself or herself naively for an unhealthy love. When it's a girl loving a troubled boy, this is often All Girls Want Bad Boys taken to extremes.

If the Love Martyr is literally killed because of their relationship, and the partner still doesn't make a Heel Face Turn, then the Love Martyr becomes a shaggy dog. Unfortunately, this is the Real Life trope when a relationship ends with one or both partners dying, and shaggy dogs are the realistic and most common result of abusive relationships that the victim doesn't get out of.

Love Martyrs aren't limited to Love Interests alone: siblings who look up to their Jerkass (and sometimes outright evil) older siblings as the best of role models and children who desperately try to please notoriously obstinate parents prove that familial love can hurt too.

Compare Mad Love, where the person unconditionally in love is depicted unsympathetically as hopelessly blind and often Ax Crazy, devoted to someone who doesn't care one bit in return (but is sometimes happy to take advantage of the situation). See also All Take and No Give, Monster Fangirl. Often goes hand in hand with Why Would Anyone Take Him Back?.

Can be Truth in Television.

Examples of Love Martyr include:

Retrieved from "https://allthetropes.org/w/index.php?title=Love_Martyr&oldid=1871483"
Categories:
Cookies help us deliver our services. By using our services, you agree to our use of cookies.