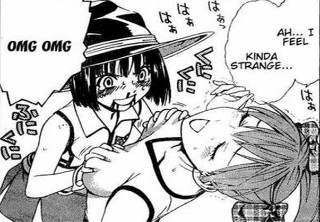 Near opposite of the Dirty Old Man, where a kid is ridiculously young, but still has some signs of... "interest".

What's most notable is that often, kids or babies are allowed to cop a feel, simply because it's said that they don't understand what they're doing.

Note that there seems to be some level of Double Standard, since most of the examples seem to be male.

See also Kidanova, which deals more with the romantic aspects, as opposed to the sexual ones.

Not to be confused with The Pig Pen, who is filthy in a different way.

Examples of Dirty Kid include:

Retrieved from "https://allthetropes.org/w/index.php?title=Dirty_Kid&oldid=1588602"
Categories:
Cookies help us deliver our services. By using our services, you agree to our use of cookies.