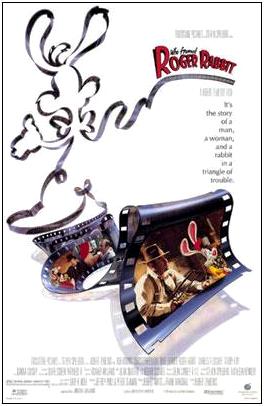 The story of a man, a woman, and a rabbit in a triangle of trouble...

A brilliant (and very expensive by that time's standards [1]) 1988 film largely responsible for setting off The Renaissance Age of Animation. It had a huge influence on executives' attitudes toward seeing animation as more than what it had been in the Dork Age -- Disney's 90s animated films, the Pixar films, The Simpsons, Tiny Toon Adventures, Animaniacs, Batman the Animated Series, and the Nicktoons and MTV cartoons would probably never have existed if it weren't for Who Framed Roger Rabbit. It is so far the only collaboration between Disney and Steven Spielberg's former studio Amblin Entertainment, and is the only official crossover with classic Disney, MGM and Warner Bros characters.

Set in the city of Los Angeles during late 1947, during The Golden Age of Animation to be specific, the Hardboiled Detective Film Noir tribute depicts a hypothetical world where cartoon characters are a real ethnic minority living alongside human beings. At the center of the story is Roger Rabbit, a Toon movie star on the run from the police after having been accused of murdering Marvin Acme, a human manufacturer of cartoon props, with whom Roger's wife Jessica happened to be playing patty-cake.[2]

His only hope is Eddie Valiant, an alcoholic human detective who has refused to work for Toons ever since one killed his brother by dropping a piano on his head during one of their cases. He winds up getting sucked into the investigation after Roger hides out at his apartment. Together, the two of them uncover something much bigger than either of them expected.

The film is (very) loosely based on Gary Wolf's 1981 novel Who Censored Roger Rabbit? It also owes a lot to Chinatown. The title of the film officially has no question mark at the end; rumor has it this is the result of a marketing survey which said films with question marks in the title make less money. The film is notable for being the biggest crossover of famous Western cartoon characters pre-50's than anything that has come before it (it is the first and only official time Mickey Mouse and Bugs Bunny appear in a scene together).

While the film was very well received by critics, it has not been without criticism, especially -- and surprisingly -- among actual Golden Age veterans and fans. Chuck Jones in particular, who worked on the film, ended up loathing the final product, citing it as a obnoxious, witless misunderstanding of the old cartoons it set out to homage and even accused Robert Zemeckis of robbing Richard Williams of any creative input -- and for apparently ruining the piano sequence that he and Williams had planned together. Cartoon historian Michael Barrier derided the animation direction as "disastrous", and Frank Thomas of Disney's Nine Old Men was strongly disappointed in Richard Williams failing to have any actual pathos come from the main character himself. John Kricfalusi has also not spoken highly of it, thinking that it had "great animators" but was "misdirected", "filled with takes and zany movement but no character or wit." Although not confirmed, its rumored that Ralph Bakshi loathes the film only because one of his films ended up being a copycat of the film from what he originally envisioned it as.

It also had three Spin-Off theatrical shorts that ran from 1989 to 1993, all of which were included in the film's special edition DVD release. The book series itself used the film as canon.

It should be noted for historical purposes that the entirety of the animation that appears in the film was done BY HAND -- no computers of any kind were used, except for some blue-screening when Eddie Valiant went to Toon Town, where everything was animated.

A sequel was planned shortly after the booming success of the original, but it never came to light. The first obstacle was that the film was intended to be a prequel set during World War II, but Steven Spielberg refused to work on a movie that satirized Nazis after finishing Schindler's List, and he was moving on to start DreamWorks at the time. Then, a skyrocketing (for the time) budget and the advent of computer animation landed the second movie in deeper waters.

On October 30, 2009, director Robert Zemeckis had confirmed that a second Roger Rabbit movie was on on the way, with Zemeckis himself returning to direct the film and the original screenwriters, Seaman and Price, returning as well, but with the dismantling of Zemeckis' studio the sequel's fate is now uncertain.

Tropes used in Who Framed Roger Rabbit? include:

Retrieved from "https://allthetropes.org/w/index.php?title=Who_Framed_Roger_Rabbit%3F&oldid=1861394"
Categories:
Cookies help us deliver our services. By using our services, you agree to our use of cookies.