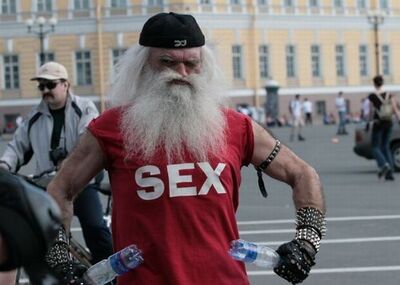 A Dirty Old Man is just what it sounds like—an older male character, usually unattractive in some way, who takes more than a passive delight in young women. Sometimes he limits himself to just talking dirty and propositioning cute girls, but sometimes he takes matters into his own hands, literally. He's not Casanova, nor is he necessarily trying to be—but he certainly won't complain if things work out that way for him.

The "old" part of his description is mostly relative to the girls he accosts—a creepy thirty-something teacher eying his junior high school students is no less a Dirty Old Man than a geezer in his sixties pinching the bottoms of housewives in the supermarket (indeed, it's much worse to drool over underage girls you have power over), though it's worth bearing out that a younger Dirty Old Man's behavior is going to be seen as a good deal less harmless than that of his hoary-headed counterparts. Probably because a Dirty Old Man is supposedly less likely to chase his victims, or force worse things upon them.

When played for comedy he is either a disgusting pervert who gets beaten up by the girls he assaults, or a delightful rogue whom the girls tolerate. When played seriously, he's usually some variety of sexual predator.

In Britain, these characters are typically seen wearing brown mackintosh coats, which allow concealment of a certain activity, leading to them being referred to as "the dirty mac brigade." In the U.S., it has long been popular to depict this fellow traipsing around in a Conspicuous Trenchcoat (often with the innuendo that he's wearing nothing but the coat).

For an Anime variant which is somewhat less repulsive, see Lovable Sex Maniac. Played sympathetically, this character is likely to fall under Chivalrous Pervert.

Dirty Old Women are not usually so frowned upon.

Examples of Dirty Old Man include:

Retrieved from "https://allthetropes.org/w/index.php?title=Dirty_Old_Man&oldid=1945551"
Categories:
Cookies help us deliver our services. By using our services, you agree to our use of cookies.