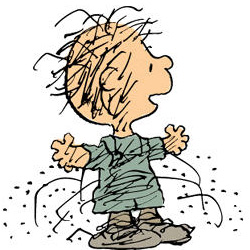 Nah, he won't have health issues later in life...

A character whose overwhelming trait is that they are absolutely filthy. Not filthy in morals, behaviors or ethics, but someone whose body is actually covered in filth. The person might have other qualities as well, but their filthiness is bad in relation to the rest of the cast, or at least the setting. There is a good chance that they are not pleasant to look at.

It could be someone who is just not trying hard to stay clean, someone who just seems to attract filth, or someone who actually revels in filth and grime. Could be a Trash of the Titans as well, but remember that this trope is about someone who is filthy on a personal level. This trope could also apply to animals who like to play in garbage and mud. Maybe even a Planet of Hats of people like this.

There is some Truth in Television, as people used to rarely bathe or keep themselves clean. But as inventions such as electricity, indoor heating and indoor plumbing became more commonplace, walking around in a large layer of grime became rarer.

Named after the Peanuts character Pig-Pen, pictured right, who was always surrounded by a cloud of dust and has been seen going from "perfectly clean" to "covered in dust" while walking down the road or—most absurdly -- in a rainstorm. Also see Men Can't Keep House, Dirty Foreigner. A character who offsets bad hygiene with high intelligence is a Genius Slob.

Do not confuse with Dirty Kid.

Examples of The Pig Pen include:

Krillin also had to fart in Bacterian's face, meaning that Bacterian could handle only his own stench. But the other ways Bacterian fought...poor, poor Krillin...

From the same series, villain Captain Fray (Capitão Feio) (who has a barely remembered origin as Smudge's uncle).