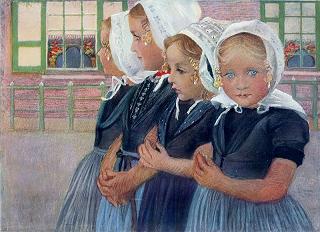 Victorian-era Europeans are the direct inspiration of a dominant view of children, inspired by the New Testament and stretching to the present day. In this view, there is a sharp transition between innocent child and little adult. The conventional age Western culture assigns to this tradition has grown over the years. The meme, however, remains: a young child is a Blank Slate not yet sullied by the evils of the world. Only upon coming of age does the child lose this innocence.

The Children Are Innocent trope captures the idea that children are never naturally evil. A consequence is that harming one is the ultimate evil act, no matter how provoked—unless that is forcing others to harm them. This is an extremely pervasive trope that is at the heart of many other tropes, such as Friend to All Children, Harmful to Minors and Dead Little Sister, and often motivates Papa Wolf and Mama Bear. When the Big Bad kills nameless hundreds, the heroes will say the villan killed women and children. The Children Are Innocent trope is old enough that it is difficult to assign it an age; but certainly it goes back to the New Testament.

Expect those who buy into this trope to hold that any villain character Used to Be a Sweet Kid until something bad happened to them, especially if they also believe that Rousseau Was Right. (Also keeping in mind that some view puberty as a Start of Darkness in its own right, and take much the same view of any worldly experience.)

Off-stage children almost always fall under this trope; the subversions all require some development, and being informed that a character has killed, injured, exploited, etc. children is always a mark of evil without such development. See Empathy Doll Shot. Indeed, one of the commonest ways to subvert Exclusively Evil is to bring up their children, as in the Genocide Dilemma.

Where blond hair is found naturally, children are often depicted with Hair of Gold. Indeed, this trope is considered to drive that one: because children (and the young) are more likely to have blond hair than older people, blond hair is a sign of innocence.

Part and parcel of this is depicting children as the other meaning of innocent: naive, guillible, and altogether too trusting. They can misunderstand anything other than the most obvious. On the other hand, this very quality can lead to their being Too Dumb to Fool.

Frequently children Can Not Tell a Lie, because they are too innocent to think of suppressing the truth. Children who do start to lie often show this is new to them by being momentually Bad Liars.

Standard for an Innocent Prodigy. Often comes into play for A Child Shall Lead Them. Generally does for Constantly Curious and Curious as a Monkey.

Spoiled Brats may subvert this. On the other hand, if the causes of the spoiling are clearly identified, and the children revert to innocence when they are removed, the children may still be innocent.

Even when the child is doing wrong—as in the Mouthy Kid, the Bratty Half-Pint, and Kids Are Cruel—it is often regarded as not as wrong as when an adult does it, because children have to learn empathy, and not to be self-centered, and also often have a poor grasp of consequences of their actions. On the other hand, this often leads to Ambiguous Innocence.

The Creepy Child, the Enfante Terrible, and Corruption by a Minor, on the other hand, draw much of their force from their knowingness. They understand as much, if not more, than the adults about them, which contradicts not only this trope but the general understanding of children.

This gets thrown right out the window in a Teenage Wasteland, though the forced loss of innocence may be a major theme.

There are also subversions that portray children not so much as evil but as capable of counter-tropical insight. Subtrope for Children Are Special.

Invoked, however derisively, by Silly Rabbit, Idealism Is for Kids. Compare Amnesiacs Are Innocent.

The reason the ageism double standards were created.

Examples of Children Are Innocent include:

Retrieved from "https://allthetropes.org/w/index.php?title=Children_Are_Innocent&oldid=1865670"
Categories:
Cookies help us deliver our services. By using our services, you agree to our use of cookies.