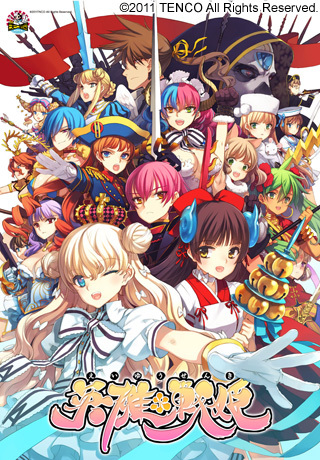 An H-game by tenco released March 30, 2012, Eiyuu Senki is most notable for starring a cast made up pretty much entirely of famous heroes and historical figures... turned into various bishoujo game heroines.

The gameplay overall is most reminiscent of the Rance series by Alicesoft, with a similar SRPG format as well as Loads and Loads of Characters, most of which you the protagonist can have sex with. Battles are done on a 3-square wide board, with your characters (up to six per battle) on the left and enemies on the right. The game is turn-based, both on the larger campaign map that shows all the various cities that can be conquered, as well as in individual battles. A few actions can be made per campaign turn, such as doing character missions, fighting battles and doing events; as the game progresses you can perform more actions per turn.

The characters are all improved through spending money (earned every turn on the campaign map and based on which cities you own) and through winning battles; characters who fight in a battle will receive a small amount of extra Power (which acts as both health and an indicator of overall strength), with an added amount if you complete a battle quickly and with few losses. Characters can also be improved through character interaction missions, which take up actions in each campaign turn but allow you to unlock additional abilities and attacks, more item slots, and of course sex scenes.

There are also items that can be applied to characters, acquired through missions and objectives as well as character interaction and story progression. Effects of these items range from increasing stats or decreasing the time between each of their turns.

Tropes used in Eiyuu Senki include:

Retrieved from "https://allthetropes.org/w/index.php?title=Eiyuu_Senki&oldid=1611948"
Categories:
Cookies help us deliver our services. By using our services, you agree to our use of cookies.