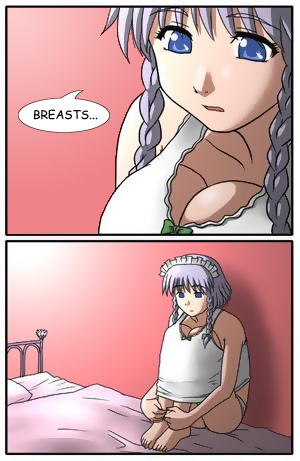 In many cultures, large busts are usually more popular with men than small ones. But not all girls can be that well-endowed, and while some wear the "ironing board" title with pride, others have low self-esteem as a result of their conspicuous lack of cleavage.

This can be for a variety of reasons, but the most common are the belief that Buxom Is Better, being mistaken for a kid, and being thought of as childish and immature because of her small chest.

Things commonly done by this type of small chested woman:

This could also apply to any woman that is under a d-cup (B-cup Bitchiness, C-cup Cynicism).

Contrast Petite Pride and Buxom Is Better. Compare Big Breasts, Big Deal for self-image with bigger assets. In anime fanspeak this type of character is called a Pettanko.

Examples of A-Cup Angst include:

Retrieved from "https://allthetropes.org/w/index.php?title=A-Cup_Angst&oldid=1891500"
Categories:
Cookies help us deliver our services. By using our services, you agree to our use of cookies.