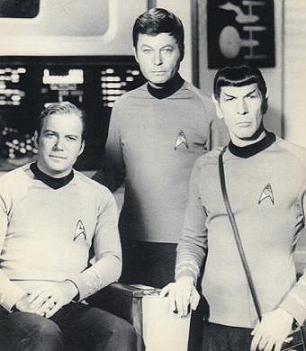 Among a Trio of the "two Foils + balance" variety, one of the most common subtropes has the three characters have psychological positions based on the Freudian idea of The Ego, The Superego and The Id.

Freud defined the human psyche as consisting of three parts: The Id, which represented emotional and instinctual desires; The Superego, which represented the logical and intellectual reasoning (or rules and social conventions, which is how Freud actually used the term); and The Ego, which reconciled The Id and Superego. Likewise, the Freudian Trio consists of three characters: one who acts emotionally and instinctively, one who acts with cold, passionless logic and one who reconciles the two conflicting ideals.

Sometimes the Id/Superego dynamics play out with just two characters, but in those cases the representatives of opposing sides must learn to negotiate with each other. In a Trio, they are free to be more extreme, and it falls to The Kirk to lay the smack down and keep the group integrated. The leader of a Freudian Trio may not necessarily be The Kirk but often is. The second most likely to be the leader is The McCoy, the most noble and caring one. It might be that The Hero is the emotional id, his lancer is the practical ego and The Smart Guy is superego.

In Betty and Veronica love triangles, the Betty may represent The Superego, the Veronica The Id and the person making the choice between them may be The Ego. A Comic Trio uses the same ingredients, but the leader is crazy, the action one is stupid, and the thinking one is powerless. Depending on the Fandom and its tendency for Shipping, a Trio may easily become a One True Threesome. Compare also Good Angel, Bad Angel if you see the "Shoulder Devil" as The Id, the "Shoulder Angel" as The Superego and the person whose shoulders they rest on as The Ego.

The Evil Duo is a Foil to this arrangement consisting of two villains who show how the Trio fails to function without one of the members. The most common form is with one Id villain and one Superego villain, but an Id/Ego pair or even an Ego\Superego pair is not unheard of.

For a more in-depth look at Freud's theories, check out Id, Superego and Ego.

Examples of Freudian Trio are listed on these subpages:

Retrieved from "https://allthetropes.org/w/index.php?title=Freudian_Trio&oldid=1754228"
Categories:
Cookies help us deliver our services. By using our services, you agree to our use of cookies.