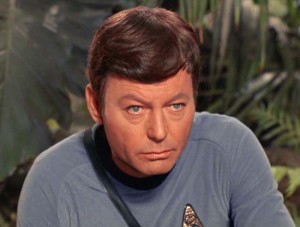 Can't you see from my expression how inhuman this so-called "logic" is?!

The McCoy is part of a Freudian Trio along with The Kirk and The Spock. Where the former is rational and intuitive, and the latter is cold and logical, The McCoy is emotional and humanistic. He cares about others deeply; for him doing the right thing is not a question of convenience or moral relativity, but about the concrete reality right now. Which is to say, someone like The Kirk cares about saving people; the McCoy cares about making things right. This often leads the heroes into hot water as this concern for others blinds him to complications in the Moral Dilemma of the week and leads him to advocate (or take it upon himself to do) "the right thing", regardless of how disastrous it would be in the short or long run. In Freudian psychology, this character represents the concept of The Id.

That said, they help keep the drama of a situation personal both for the characters and the viewer, reminding us just why the Littlest Cancer Patient deserves for The Hero to use the phlebotinum that only works once on him rather than to get them home. To be fair, the Spock can be just as compassionate, but is tempered with detachment and enough forethought to realize that the right answer might not be the correct one, (illogical as that sounds).

The McCoy is frequently a target for reminders about the Prime Directive, and one or more episodes might focus on how having his heart on his sleeve can actually cause quite a bit of damage to the people he "helps" with the best of intentions.

The McCoy still functions as an admirable character, however, due to his absolute devotion to his Moral beliefs and his refusal to give in to what others may tell him. For him, there is no such thing as acceptable losses. And if you start claiming that numbers can be lost or that A Million Is a Statistic, you can expect a thorough chewing out for your coldness. In the McCoy's mind, every life matters and everyone deserves to be saved. While The Spock sees people as numbers in the greater picture, The McCoy sees people with real lives and emotions.

Also, The McCoy exists as a counterpart to The Spock. If they are the moral center of the team in general too, then they are The Heart as well. Likely to be the Red Oni in a Red Oni, Blue Oni combination.

The McCoy is the Honor Before Reason Trope personified, and may occasionally be a Strawman Emotional.

If you're looking for a person or work named "McCoy", see the disambiguation page.

Examples of The McCoy include:

Retrieved from "https://allthetropes.org/w/index.php?title=The_McCoy&oldid=1936465"
Categories:
Cookies help us deliver our services. By using our services, you agree to our use of cookies.