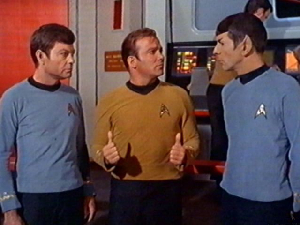 Rounding out the archetypal Freudian Trio with The Spock and The McCoy, The Kirk must balance these opposing personalities while being able to take their advice and choose between them (or literally, choose "between them") without being overcome either by emotion or dispassionate logic, representing what in Freudian psychology is called the ego.

Usually, The Kirk is The Captain or a similar leader who needs to be practical rather than emotional or distant. It's not impossible for a show to have The McCoy or The Spock as the leader, but they'll have to be far more ideologically flexible than they would otherwise.

They usually share a lot of the traits of the Reasonable Authority Figure, but depending on the slant of the series he might lapse into less than heroic decisions, or end up choosing one of his two friends over the other more often. That said, the burden of deciding what course of action to take can be heavy, while the task of bringing his friends around to accept said decision is complicated as well. At the least, he's mostly immune to Death By Pragmatism. With poor characterization, may become the Standardized Leader.

Examples of The Kirk include:

Retrieved from "https://allthetropes.org/w/index.php?title=The_Kirk&oldid=1935093"
Categories:
Cookies help us deliver our services. By using our services, you agree to our use of cookies.