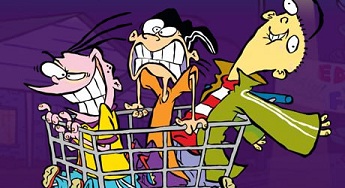 The leader, the complainer, and the idiot. Try to guess which one's which.

If a comedy show has three main characters, they will almost always fill stock roles in the plot. To get how it works, imagine this scenario:

Three people are in a car. The navigator considers himself The Leader and the smartest, who tries to get the three of them to their destination; but he's seriously out of touch with reality, or has no idea what he's doing but refuses to admit it, and shouts bizarre directions that will inevitably lead to the car going off a cliff.

The driver is a total moron who blindly does whatever he's told. So, with the navigator screaming directions at him, the car approaches the cliff. In theory, the driver could stop at any time, but he keeps following instructions out of stupidity, ignorance, or spinelessness.

Meanwhile, trapped in the back seat, is the Only Sane Man. He doesn't have to be smart, but he is the only guy who is fully aware they're about to fly off a cliff, and he's completely unable to stop it. He tries to alert the navigator, but he can't outshout that bullying idiot. He tries to reason with the driver, but since he obviously isn't the designated navigator, the driver happily ignores him. He then looks to the wheel to grab it from the driver, but he doesn't have the guts to try, and risk crashing the car himself. It is his reaction that is usually focused on most as the car goes sailing off the cliff...

Often the Only Sane Man resigns himself to his position of powerlessness, even Breaking the Fourth Wall to comment on the hopeless situation. This kind of third man orten becomes a Deadpan Snarker to deal with their inevitable and repeated doom, and is the most likely to remain calm as the car plummets to its doom.

That's the Comic Trio. One character powers the plot with their bizarre obsessions, one keeps it going by blindly following orders, and a Straight Man fails to prevent the disaster.

The most common set-up is for the navigator to be a Pointy-Haired Boss and incompetent Schemer whose schemes always backfire, but there are other ways to do it.

In clowning, these positions are referred to as Whiteface, Auguste, and Tramp.

This is a type of Power Trio. Contrast with Freudian Trio, a much less dysfunctional variation. Also compare with Terrible Trio.

Examples of Comic Trio include:

Retrieved from "https://allthetropes.org/w/index.php?title=Comic_Trio&oldid=1749103"
Categories:
Cookies help us deliver our services. By using our services, you agree to our use of cookies.