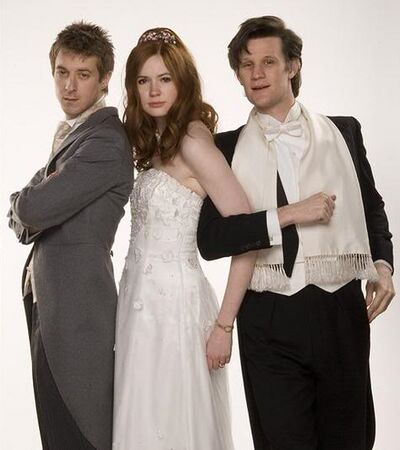 Can we fit another groom on the cake?

In any given fandom, if there is any Shipping going on at all, there will usually be a particular couple substantially supported by both the Canon events of the series or story, and the general consensus of the fandom regarding Fanon; even if some parts of the fandom isn't thrilled about the nature of the relationship, it's generally agreed upon that the relationship does exist and cannot be easily ignored. These unbreakable couples are usually (but not always) comprised of the main protagonist and their Love Interest, though they're often seen among villain groups as well, and what makes this unique relationship can really only be decided by the individual viewer: they are called OTP: One True Pairing.

In some cases, there may be a case of love rivals competing for a single love interest, and the fandom is wholly divided over which one most deserves to get the girl or guy, with larger fandoms developing into factions devoted to one relationship over another. Or it may just be a matter of a standard Love Triangle, or a particular corner of a Love Dodecahedron where, because a romantic relationship must consist of exactly two people, one of the competing parties is eventually going to be disappointed. And sometimes, because of Fan Dumb, this can go overboard and cause massive amounts of Fan Wank.

In an incredible display of Take a Third Option, some fans adopt the concept of the OT3: the One True Threesome. It's just like One True Pairing, except there's three characters involved; most often this means the Hero, the Love Interest, and one of their best friends with whom they've had homoerotic subtext at some point. That way everybody's happy, the sex is kinkier, and no matter who's involved, there's always a little homoeroticism happening. It's like Give Peace a Chance, only instead of Peace, it's Three-Way Sex. While these groupings are most often the result of combining two other disputed couples, there are some examples of characters who simply group together in this way without the fandom splitting them into pairs; Power Trios are especially ripe for OT3ing.

See also Type 8 in Triang Relations; while other relationships modeled by that trope may include three characters, the distinction of the OT3 is that all three characters are involved and in some degree of love with each other. On rare occasions it's been proposed as a solution to Type 7, Type 9, or even Type 2 Triang Relations.

Polyamory, naturally, ties in with this (though it can go beyond three). For resolving relationship dynamics that go beyond three people, see Tenchi Solution.

"OT3" redirects here. Not under any circumstances should this be confused with the other OT3, that is part of the Church of Happyology.

Retrieved from "https://allthetropes.org/w/index.php?title=One_True_Threesome&oldid=1930379"
Categories:
Cookies help us deliver our services. By using our services, you agree to our use of cookies.