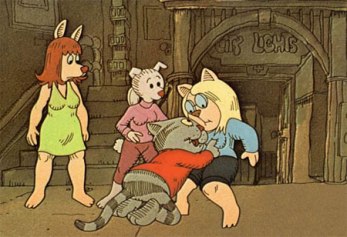 Ralph Bakshi's 1972 feature film adaptation of Robert Crumb's comic strip Fritz The Cat. Famous for being the first X-rated animation in the United States, it is an amalgamation of many plotlines from the comic into a feature film. It was more overt in its political and social commentary than the comics, which were largely light entertainment.

The movie follows Fritz as he roams New York (and later takes a roadtrip to San Francisco) in The Sixties, ostensibly looking for a cause to join in. Over the course of the movie he spends time hanging out with stoners, talking to black people (represented by crows) in Harlem where he meets Duke, very briefly meeting with some Rabbis, going on a road trip with his girlfriend Winston, and ultimately meeting with extremists who blow up a power plant. Unsurprisingly, he spends most of the movie running from the police (represented as, of course, pigs). Of course, his goal of finding himself always seems to take a back seat to more immediate gratification in the form of carnal pleasures or good ol' fashion weed.

Though he had directed several TV shows previously, this was Bakshi's directorial debut for a full-length film. After coming across a Fritz comic in a Manhattan book store, Bakshi went straight to author R. Crumb to ask for the rights to turn the comic into a movie. Although Crumb gave Bakshi a sketchbook of his to help him learn to draw Fritz, he was highly doubtful of the film's potential for success, and never agreed to sign over the rights to green-light the film. Producer Steve Krantz, however, struck a deal with Crumb's wife, allowing the film to begin production; Crumb was paid $50,000 for the film rights.

The movie harshly criticizes the hippie lifestyle and leftist views in general. When the movie finally premiered Robert Crumb expressed dismay over Bakshi's political choices in the film, calling the final part of the film "fascist." Crumb also found the rampant sexual themes of the movie to be offputting - saying of Bakshi, "It's like real repressed horniness; he's kind of letting it out compulsively." Which is a little bit odd, given that such things are ubiquitous in Crumb's work. Just read any of it.

Because of this film's politics, Crumb killed off the character in the comic "Fritz the Cat, Superstar". Later, Steve Krantz produced a sequel, The Nine Lives of Fritz the Cat, released in 1974, which largely consists of scenarios in which Fritz repeatedly dies.

Tropes used in Fritz the Cat (animation) include: