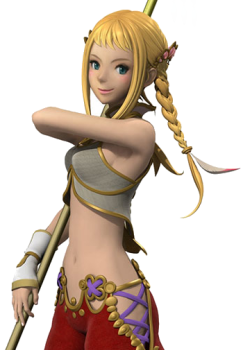 When a female character's costume doesn't include a bra—or, for that matter, any underclothes at all. It may be made from a translucent material (with strategically placed lace or tape for modesty), feature a window to show off some Absolute Cleavage or Underboobs, or may be something backless, but whatever the case, the outside costume is all that the person is wearing. If she's wearing any underclothes at all, they must be made of air—or, should we say, Vapor Wear.

Vapor Wear is the default dress code for The Vamp and the Femme Fatale, whose personality traits match up well with the ability to waste no time removing her knickers, and who (if seen in something less vampy) will specifically mention the lack of underwear, which can present even an ordinary outfit as something interesting or unusual.

This trope can also apply to male characters, but rarely does, because nipple nubs tend to be more socially acceptable than a certain bulge.

Vapor Wear is a significant factor in the Theiss Titillation Theory.

Not to be confused with Censor Steam. Or Vaporware. Nor with the similarly named Real Life clothing company that, alas, bears absolutely no relation to this trope.

Examples of Vapor Wear include:

Bystander: Son, I wanted you to learn about the female body; I just wish your first sight of it wasn't twenty feet wide.

Mr. Weis: She's practically naked in that thing!
Janet: Well I can't wear anything under it, Daddy, it would spoil the lines.

"She winnowed close then. I made out that she didn't have on air stitch under her silky dress. She was proudly made, and well she knew it. She stood so close she near about touched me."

Did you know only 1 in 1200 Gaians wears underwear? I'm the expert. Since I'm short.

Nip slips were so 2004. This year the thing to do was to denude your ladyflower, wear a short skirt and no underwear, and then spread your legs wide as you emerged from a limousine. Exposed O'Keeffes included those of Kate Moss, Lindsay Lohan, Paris Hilton and, of course, Britney Spears, who flashed so much cooter the week after her marriage broke up that at this point many of us could probably provide police with an accurate sketch.
—Rebecca Traister [Salon's "Year in Sex, 2006"]