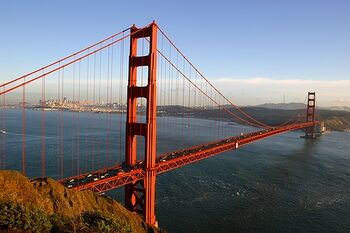 "I left my heart in San Francisco..."

If there's an ideal place for a Chase Scene involving cars, it's definitely San Francisco, California.

Really close to the San Andreas fault, San Francisco has a lot of incredibly steep hills crisscrossed with streets. But of course, these streets must intersect, and these intersections must be level and horizontal, otherwise the cars will tilt sideways while turning. As a result, many streets in San Francisco are long, alternating series of flat intersections and steep slopes, similar to stairs—the perfect place for grabbing a lot of Slo-Mo Big Air.

Of course, this is a Discredited Trope to many familiar with the area. San Francisco's streets are very narrow, often crowded, and stop and go in nature, and the charming little cable cars (that climb halfway to the stars) run in city streets, sometimes necessitating urgent lane-changes on the part of automobiles in their vicinity.[1] Lombard Street is particularly a bad street to take when fleeing, as there is a large back up of the cars of tourists that wish to drive down the famed road, in addition to the eight switchbacks between Hyde and Leavenworth streets from which said fame derives. Despite being a horrible idea, Bullitt (and lately, Driver San Francisco as well) inspired too many teens who now try to do it.

In almost any film or TV show, the cable cars will be made to seem almost everywhere, with the stock establishing shot a cable car cresting over a hill lined with Victorian houses while the Golden Gate bridge is framed in the background. In reality there are only three lines, they serve a very small part of town (primarily the wealthy part of town), cost almost three times as much as other public transit, and are almost always packed with tourists who wait in long lines to ride them. Many residents have never ridden them, preferring the rest of the Muni system, which consists of buses, streetcars, the Market Street Subway, and BART (Bay Area Rapid Transit).

In addition to car chases, San Francisco is known for its countercultural roots (the Beatnik movement and hippiedom were both born here) and its large gay community. Thanks to both of these, there's a popular (and not entirely unfounded) stereotype that San Franciscans are very far to the left of the American mainstream, especially on social issues, to the point where some conservative pundits use the term "San Francisco values" (as contrasted with "American values") to describe this. There is some truth to this belief, as San Francisco does have the highest percentage of gay residents of any city in the U.S., coming in at a whopping fifteen and change percent of the entire city's population—and those are just the ones that are open about it. Its closest rivals are Seattle, Atlanta, Minneapolis, and Boston, not one of whom tops thirteen percent.

Norton I, Emperor of the United States and Protector of Mexico, decreed the page quote condemning use of the nickname "Frisco". Use of the term today will immediately peg you as an out-of-towner, and will result in the same kind of eye-rolling a 50-something authority figure will receive when trying to use "cool" slang amongst teenagers. San Francisco is "The City." Oakland, the city across the bay, is "The Town." There does seem to be recurrence of the term among some of the younger locals, perhaps for reasons of irony.

San Francisco is, of course just one city on the Bay. Oakland as well as the cities of the peninsula have been growing for some time. San Jose has the rest of Silicon Valley between it and San Francisco. Although most deny it, San Jose is now larger than San Fransisco, in part due to San Fransisco being on a peninsula and not having room to expand. However you only call it the Peninsula for the parts south of the city.

Wearing flowers in your hair is not advised these days. Especially if you're a guy. Unless you're into that sort of thing. If so, for aforementioned reasons you've chosen a wonderful place to be.

Nancy Pelosi, the congressional representative for most of the city, is the former Speaker of the United States House of Representatives.

Stereotypical portrayals set in the 19th century will generally either center on the Gold Rush or with San Francisco portrayed as the "New York of the West". Those in the early 20th century tend to show it as a blue-collar port town, perhaps with a major US Navy presence, and still the largest city on the West Coast. The '50s characterization trends towards Beatnik stereotypes and will be set in North Beach, while the '60s shifts that to hippies in Haight-Ashbury. If set in the '70s or '80s, tropes will tend to either focus on the homosexual population, inner-city crime, or, at the latter end of the spectrum, the AIDS crisis. The mid-to-late '90s is likely to be dominated by the dot-com boom.

Though less frequently a trope, San Francisco is also particularly known for its large homeless population, which shows up primarily when a creator showed their work and generally has a point to make with it.

And please don't forget your heart (or your head) when you leave.

San Francisco in the media