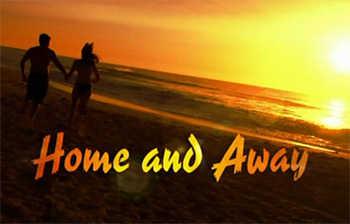 One of two long-running soaps on Australian TV, the other being Neighbours.

The series began in 1988, with Tom Fletcher being laid off from his job. He decided to get away from the hassles of city life, and took his wife, Pippa, and their five foster children (and imaginary friend Milco) to the coastal village of Summer Bay, where he purchased a caravan park.

Home and Away is notable in that, unlike Neighbours, the show has had one cast member (Ray Meagher) stay on board from the very first episode. Another notable totable is that unlike most soapies, this one is aimed squarely at teens, as well as older fans who grew up with Sally (Kate Ritchie, the longest-serving female cast member, who was also in the first episode, but left in 2008).

Tropes used in Home and Away include:

Miles:Who calls their son 'Penn'? Does he have a sister named 'Cil'?