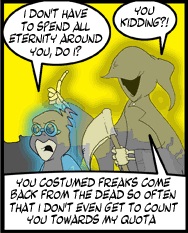 A real man never dies, even when he's killed!

So you had your big, important fight. The enemy is defeated, and wasn't even Left for Dead. They did, in fact find the body. No One Could Survive That, and no, he didn't. He's not pining for the fjords either - nor did he Ascend to a Higher Plane of Existence. He's just dead. Sure, because, as everybody knows, Anyone Can Die.

Except he's back the next time the story requires it. Be it resurrection, reincarnation, time reversal or some other form of magic, death is quick but seldom permanent.

This is an old fighting Shōnen manga and comics trope. Important characters will have a terrible tendency to die dramatically, but will not, under any circumstances, stay dead. This of course requires a lot of supernatural involvement, but that's not so uncommon either. Viewers are often shocked when they are exposed to this for the first time, but it's just a variation of the Not Quite Dead tropes listed above, since it merely hinges on a rather different value of "dead". This separates it from the Western Back from the Dead in the respect that it's quite often planned, and not the result of just lazy writers (well, at least writers lazy in another way), and requires less obvious plot hacking to enable. The character was not really Killed Off for Real, the chance of him coming back was always there. However, this tends to cheapen the dramatic death of a character to the point of being little more than a flesh wound if overused. If you ever hear passing mention of any form of afterlife in a series, be warned that the value of "dead" has become a whole lot less all of a sudden. Similarly, if the entire supporting cast is being killed off left and right, expect a resurrection by the end of the current arc. This trope became so common in some series that most people are more likely to be shocked if a character does not come back from the dead than when it does.

Also, it relies on the character being important - since few people are able to come back from the dead on their own accord, it must be important enough for the rest of his posse (or the Writers) to care enough to resurrect him. And a minor Red Shirt just doesn't have enough clout for that, and will probably never be heard of again.

Since villains tend to do this often, it is usually necessary to kill them Deader Than Dead to ensure they don't just come back eventually. Because normal death means little, this "advanced form" is usually permanent. If it works as planned.

So common is this trope in comics that many other sources refer to it as Comic Book Death. Comics have a slew of means to undo death, often involving Opening a Can of Clones. Usually the only characters in comics to stay dead are those involved in a Death by Origin Story.

See also Disney Death, and the Sorting Algorithm of Deadness for a closely related phenomenon. Immortal Hero applies when this applies to heroes, but not villains. Compare Death by Origin Story. Death Is a Slap on The Wrist is a gameplay equivalent of this trope; oddly, so is Continuing Is Painful, even though it basically amounts to Death Is Expensive. Not to be confused with video games that make you die frequently. When this applies in the afterlife, as in the myth of Valhalla, see Warrior Heaven or Hell Is War.

May cause villains (or readers) to exclaim Why Won't You Die?

Examples of Death Is Cheap include:

Retrieved from "https://allthetropes.org/w/index.php?title=Death_Is_Cheap&oldid=1886732"
Categories:
Cookies help us deliver our services. By using our services, you agree to our use of cookies.