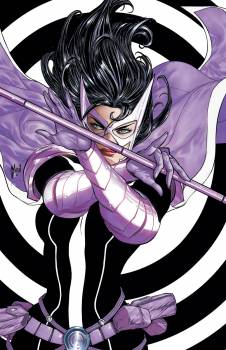 There have been two main versions of the Huntress character, Helena Wayne and Helena Bertinelli.

The original Huntress was the daughter of Batman and Catwoman, Helena Wayne, before Crisis of Infinite Earths. Existing on Earth-Two, Helena donned the cape to avenge the death of her mother. She first appeared in "DC Super-Stars" #17 (December, 1977), created by Paul Levitz and Joe Staton. She got several solo stories in The Seventies and The Eighties. As well as having regular appearances alongside the Justice Society of America and Infinity, Inc..

In her civilian identity, Helena was a prominent lawyer and partner in a law firm, with her surrogate brother Robin/Richard "Dick" Grayson, also being a member. At times the two partnered up in certain cases. Both in and outside the courts. Her other frequent partner was best friend Power Girl. Opponents included villains from both Earth-one and Earth-Two.

The character participated with others in the Crisis on Infinite Earths. She got killed in its issue #12. Like most Earth-Two characters, her existence was then erased from history. Though Power Girl has had flashbacks of Helena in stories of recent years.

Following DC's controversial New 52 reboot, Helena Wayne was returned to the Huntress identity. Co-creator Paul Levitz wrote the return/retcon, beginning with a six issue miniseries titled Huntress Helena Wayne's adventures continued in the similarly Levitz-penned World's Finest. A conversation in World's Finest #1 revealed the fate of Helena Bertinelli, establishing that Bertinelli was killed years earlier, with her identity stolen by Wayne. Though Wayne had previously served as her father's sidekick using the identity of Robin, she took on the Huntress identity when her father and Superman were killed and she and Power Girl were forced to flee to Earth One. 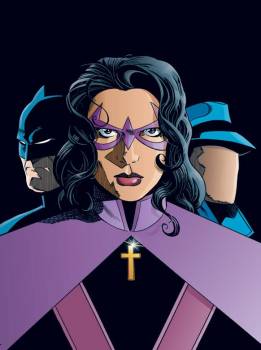 Like other old DC characters, Huntress eventually got reworked Post-Crisis. Wearing a version of her original costume, but having an entirely new backstory. The new version first appeared in "Huntress" vol. 1 #1 (April, 1989). She was created by Joey Cavalieri and Joe Staten.

Helena Bertinelli, the Huntress: what Bruce Wayne might have been if Bruce's father had been a Mafia capo in Gotham. Her father was one of the most powerful mob bosses in "The Five Families" until the other capos decided the Bertinellis were in their way and massacred every single member of the family - except for Helena, age eight, who watched as her family was murdered in front of her.

Kept safe in Sicily, she trained for years, then returned to Gotham and began pursuing the systematic destruction of the mob. Though she often pursued the same cases as Batman, Gotham's self-appointed protector held her at a significant distance due to several factors. The most apparent is Huntress's willingness to use lethal force. However, other stories have hinted that Batman feared for her safety, comparing her to Barbara Gordon. Batman sponsored her membership in the Justice League for a time, but her continued willingness to kill villains led to her expulsion. She continued to try to strengthen her ties with the Bat-family, even having a fling with Nightwing while working on a case, but to no avail.

During the late 1990s-early 2000s, things took a turn for the worse. During the year-long isolation of Gotham known as the No Man's Land, Huntress initially took up the cowl of Batgirl, unfilled since Barbara Gordon stepped down several years prior. She did so to inspire hope in the inhabitants of the city being attacked on all sides by crime lords and abandoned by the rest of America - and seemingly by Batman himself, who had been gone for many months. When Batman returned, however, he set her an impossible task in order to keep the Batgirl mantle, and when she failed, he manipulated her into joining one of the most violent groups in the city to act as a check on the unhinged leader. The crisis came to a head when she held off an assault by the Joker, felling 17 goons before the Clown Prince shot her three times in the stomach. Though Batman and Nightwing saved her life, her outlook had hardened as a result of Batman's willingness to use her as cannon fodder. Despite attempts to help from Vic Sage (The Question) and Richard Dragon in the Greg Rucka miniseries Batman/Huntress: Cry for Blood, she continued in a downward spiral of isolation and violence. By 2003 (around the time of Hush) she seemed to have hit rock bottom: kicked out of the JLA, pursued by Checkmate, no friends or support group, and wrapped up in the machinations of the villain Hush, Huntress seemingly had no way out.

All that changed when Black Canary was captured by the villain Savant, and her desperate partner in the Birds of Prey, Barbara Gordon (Oracle) begged Huntress for assistance at the beginning of the Gail Simone run on Birds of Prey. From that point on, Huntress had a firm place in Gotham's premier female vigilante team, and a growing sense of belonging. Though she temporarily left the team when Oracle attempted to manipulate her into rejecting lethal methods, she returned to ask for help in concluding her massive plan to infiltrate the Gotham mob, a plan which initially causes Batman to flip out, then look extremely foolish (and surprisingly grateful) when she turns over a complete map of the Mafia to him.

The Birds underwent several blows, starting with the departure of Black Canary, leaving Huntress as senior field agent alongside Zinda Blake (Lady Blackhawk). Eventually, Oracle disbanded the Birds, leading to a return to Huntress's more unstable days when she was willing to use lethal force. During this period, she formed ties to Renee Montoya, the second Question (another Greg Rucka miniseries, Question: Pipeline, which also contains a Shout-Out or two to Cry for Blood). When Oracle is forced to reunite the Birds during the events of Brightest Day, Huntress rejoins, and nearly loses her life to save Black Canary's in a fight against Lady Shiva. In doing so, she finally returns to the realization that she's no longer alone. Through the next several missions, Huntress impresses Oracle so much that she is promoted to field leader, a position once held by Black Canary.

Huntress's preferred methods usually include her unerring accuracy with crossbows and other bolt-firing weapons, though she also possesses considerable hand-to-hand combat skills, only enhanced by her height (5'11") and conditioning. Her outfit has gone through a large number of changes, generally retaining a black-and-purple (with occasional white) scheme, often incorporating a cross motif to reflect her Catholicism, and some kind of mask which has mimicked Batman's outline with pointed ears many times. In 2003, artist Jim Lee redesigned her costume for the miniseries Hush, and incorporated a large belly-window into her costume. When asked by Black Canary about the change, Huntress replied "700 sit ups a day."

In her civilian life, Helena has always wanted to be a teacher. When she initially started in Gotham, she managed to maintain her dual lifestyle, but after No Man's Land and her training with Richard Dragon, she was fired. She retained access to her family's three-billion dollar account for a while, but when Checkmate recruited her, they froze her accounts (which was reversed by Spy Smasher in return for successfully rescuing Ice, shortly after Black Canary left the team). Oracle both got her a stable job as a teacher and gave her considerable pay as a field agent when Helena joined the Birds of Prey, which greatly contributed to her gradual process of accepting love and trust. This process has also influenced her relationship with her faith - in Cry for Blood and the early days of Simone's Birds of Prey run, Helena seemed to regard herself as damned, and was antagonistic to God and the church as a result. As Dinah and eventually Barbara gained her trust and love, she also opened back up to her childhood faith. By the time of her duel with Lady Shiva, though still suffering from feelings of abandonment and self-hatred, she prays, knowing that God is "always there," and thanks Him for giving her life meaning.

Huntress has also appeared in a few animated incarnations. In Justice League Unlimited, she was given a similar backstory to her Mafia origins in the comics in the episode "Double Date," written by Birds of Prey scribe Gail Simone, and voiced by Amy Acker. In that story, she conflicts with Black Canary, while forming a romantic relationship with The Question. This romance continues in later episodes such as "Question Authority" and "Grudge Match". Recently, in Batman the Brave And The Bold, Huntress has appeared a few times. In "Night of the Huntress," she has a cover identity as a professor at Gotham University and a reputation as a sexy bad girl vigilante. In another Simone-penned episode, "The Mask of Matches Malone," she teams up with Black Canary and Catwoman, singing a little "Birds of Prey" ditty in a nightclub, and generally being awesome. The comic-book tie-in story "Captured by Mister Camera" implies that Helena and Batman share a closer friendship and camaraderie than their mainstream counterparts.

Creators who have significantly contributed to Helena Bertinelli's development: