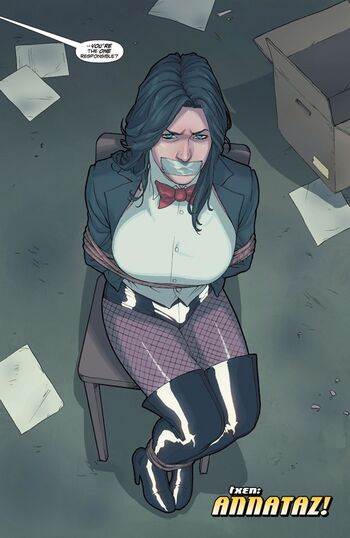 "Cat got your tongue, Zatanna?"

When a Snooping Little Kid, Damsel in Distress, or Faux Action Girl (or the occasional unlucky guy) is captured by the villain, they're usually restrained in some fashion, and to keep them from crying out for The Hero, they're usually silenced as well. In the olden days, this was usually accompanied by some form of fantastical Death Trap to add to the suspense.

Nowadays, the victim's cell phone will invariably ring and the villain will pick it up and answer, "Sorry, she can't come to the phone right now ... she's all tied up at the moment." (Villains never get tired of this Pun. Never.)

To the captives themselves, they're likely to say "I Have You Now, My Pretty" or "You Got Spunk" or some variation/combination of the two.

Sometimes this is done for humor instead. For example, a character who is considered annoying might be tied up by the group simply to get that person out of the way. Of course, if that character is really cute, the intended humor might be lost a bit on some audiences. Other times, someone might be tied up humorously as the result of some mishap. For example, the US Dennis The Menace cartoon once had a scene where a seal is running amok, and at one point grabs toilet paper in its mouth and runs around the kids, wrapping them up in toilet paper. They even get gagged by apples that get knocked off a table and fly into their open mouths.

When this trope is played for dead serious drama, you can expect, in many cases, very dark lighting and only glimpses of the bonds. It generally tends to be more light-hearted adventures that actually show a lot of rope. In those cases, part of the fun is often seeing the hero escape, or try to escape, the bonds, so there's a lot of emphasis on actually showing the bonds, the struggling, and the escape or rescue. When it's played for drama, the emphasis is on how terrible the captive feels, so there's more focus on facial expressions and less on the bonds.

Examples of Bound and Gagged include:

Retrieved from "https://allthetropes.org/w/index.php?title=Bound_and_Gagged&oldid=1945546"
Categories:
Cookies help us deliver our services. By using our services, you agree to our use of cookies.