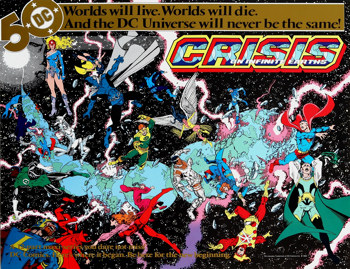 An event so vast that it can barely be contained in this space!

The mother of all Crisis Crossovers. Really: the original. Appeared as a 12-issue mini-series, lasting from April, 1985 to March, 1986.

As a child, little Marvin Wolfman wanted to do a big series where every hero in DC Comics, ever, would team up to fight a cosmic villain called "The Librarian" (hey, he was 10). Then Marvin grew up and became Marv Wolfman, the man who managed to make the Teen Titans successful.

By this time, thanks to years of Alternate Universe stories, The DCU was teeming with different worlds. There was the main universe (Earth-1), the universe of the Golden Age heroes (Earth-2), the morality-switched Mirror Universe (Earth-3)... The Powers That Be thought it was getting confusing, and turning off new readers. So, in 1985, Marv got the go-ahead to clean it all up.

So, there's a Multiverse, which is just the unified set of all the different universes. The Multiverse is guarded by a Cosmic Entity called the Monitor, whose powers are related to positive matter. But his Evil Twin, the Anti-Monitor, who guards (naturally) the Anti-Matter Universe, has discovered that his powers can increase if he destroys positive-matter universes, and proceeds to destroy the entire Multiverse. Trying to stop him, the Monitor is pushed back and knocked into a coma. Awakening, the Monitor sees that the multiverse has been cut down to just the universes we've seen before. Panicking, he gathers a group of heroes from the Earths of the remaining universes, and sends them to hold back the Anti-Monitor's minions.

The series climaxes with (almost) all of the characters who ever got their own series, plus their team-mates, their Sidekicks, and their kitchen sink, ganging up to kick the crap out of the Anti-Monitor. There is (as you'd expect) an Earthshattering Kaboom...

And the heroes wake up the next morning on Earth. It's apparently Earth-1, and some of the heroes from other universes landed here. And the Multiverse no longer exists. And everyone remembers the heroes, even the ones that were from other Earths, being here all along. And the heroes remember the Multiverse, but no one else does, except for Psycho Pirate. It appears that it was All Just a Dream - but then the Anti-Monitor tries to destroy reality one last time. So the Superman from Earth-2 takes a level in Badass, screams "I HAVE HAD ENOUGH!"[1] and punches the Anti-Monitor so hard that the Anti-Monitor ceases to exist. Cue another Earthshattering Kaboom. Now nobody remembers the Multiverse, except for poor Psycho Pirate, who ended up locked in Arkham Asylum, raving about "how worlds lived, worlds died... nothing will ever be the same"... The End.

Crisis is notable for being one of the first comic "events" (Contest of Champions actually came first, as well as Secret Wars, which was more of a merchandising promotion like DC's Super Powers), but also for promising "Everything you know will change! The DC Universe will never be the same!" and actually delivering. Unfortunately, for every continuity problem it fixed three more sprang up in its place, leading The DCU to become even more convoluted and cluttered than it was before as writers scrambled to fill in the gaps left by characters and universes that no longer ever existed. Indeed, the changes wrought throughout the DC Universe by Crisis were so profound that, according to some, its publication marked the end of The Bronze Age of Comic Books.

Crisis on Infinite Earths was followed by a companion volume, The History of the DC Universe, which attempted to lay out a new, concise narrative for The DCU; it's still worth a read as a snapshot of a bygone time in comics with beautiful art by George Perez.

Because of the holes in continuity it left behind, Crisis on Infinite Earths has spawned several Crisis Crossover sequels that have attempted, with varying success, to make sense of the mess. These include 1994's Zero Hour: Crisis in Time, 2006's Infinite Crisis, 2007's 52 and 2008's Final Crisis. The in-universe ramifications of the Crisis were also a recurring theme of the late-'80s Mind Screw series Animal Man. Much of its imagery and backstory was referenced in JLA-Avengers.