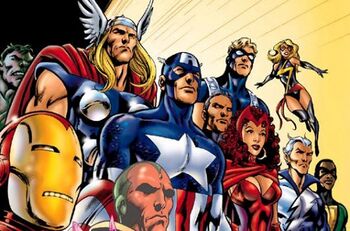 The Marvel Universe's all-star super-hero team, equivalent to The DCU's Justice League of America... except with more B-List heroes originally and a name that is based firmly on the concept of Rule of Cool (literally, Wasp picked the name because it sounded cool; some adaptations provide better explanations, though). The team debuted in The Avengers #1 in 1963. The classic lineup is Captain America (comics), Iron Man, Ant-Man, The Wasp, Thor and The Hulk. The team also within the first few issues gained the series trademark of shifting lineups, with the Hulk leaving the group with issue two, and Captain America not actually joining until issue 4, and with the major change of all the originals save Captain America being replaced by issue 16. Over the years, half of the Marvel Universe has been a member (to the point that every member of the Fantastic Four except the Human Torch has been a member at some point), with new members being recruited and old members coming back or leaving as story dictates. Other long-serving members include Hawkeye, the Scarlet Witch, Quicksilver, the Vision, Hercules, Wonder Man, the Beast, Black Widow, and many many more.

The comic has produced a good number of spin-offs and side team books including:

In 1999 they had a short-lived animated series, The Avengers United They Stand. Additionally, the two Ultimate Avengers direct-to-dvd animated films were Lighter and Softer versions of the team, and an origin for The Ultimates. A more successful animated series, The Avengers: Earth's Mightiest Heroes, came in 2010, and ends in either 2012 or 2013. The Superhero Squad Show can be considered a Lighter and Softer take on the Avengers. Yet another cartoon, Avengers Assemble, will premiere in 2013.

Not to be confused with the British Spy Couple series The Avengers.

Tropes used in The Avengers (Comic Book) include:
Retrieved from "https://allthetropes.org/w/index.php?title=The_Avengers_(Comic_Book)&oldid=1774297"
Categories:
Cookies help us deliver our services. By using our services, you agree to our use of cookies.