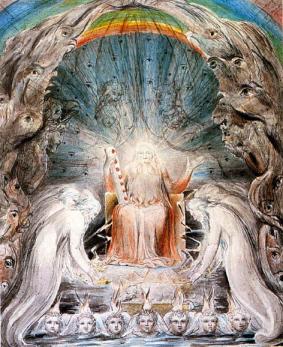 "Don't make Me come down there."

The Big Boss of the universe in monotheistic religions. The Alpha And The Omega, the Big Cheese, the Big Guy in the Sky, the Almighty, the Creator, the Capital G, the Ceiling Cat, the Man Upstairs.

If all of existence is one big story, He's the Big Good.

Metaphysical human concept or not, he's got a pretty large chunk of humanity as believers and followers, thanks in part to best-selling books such as The Bible and the Qur'an which feature God as a prevalent character, if not the main character.

Using God as a character rather than simply referring to the Powers That Be or using terms without religious connotations is a dicey proposition, as it is just about the only thing you can do, other than a series finale Clip Show, that is 100% guaranteed to piss off a chunk of the viewers.

Shows in which God plays a major role tend not to last very long, regardless of their various good points. This is a major reason for Have You Seen My God? and Pieces of God. Since depicting God is attempting to portray an infinite divine being in human terms and ideas, this is problematic at best. Rather than giving God an explicitly defined human shape and face, most tend towards a human-like figure with an obscured face, one or two giant hands in the sky, or even nothing more than an ALL CAPS WORD BUBBLE.

God is also not always seen as the benevolent ruler of everything, hence why tropes such as God Is Evil exist. Some of this is Alternate Character Interpretation from The Bible (or other similar works), but some of it is authors liking to throw in a twist or subvert audience expectations. Works which feature Rage Against the Heavens often feature God being a jerk, if not outright malevolent, to his creation, though some would say he's more concerned with perfect justice than just being nice.

In pretty much every case, though, God is shown as being very powerful. Since God is believed by followers to be the driving force behind the entire universe, this also makes a good deal of sense. Also common is a portrayal of God as the ultimate Chessmaster, and capable of executing a eternity spanning Plan. This, of course, leads people to wonder why God doesn't just solve the problem of evil with a single metaphysical finger snap, but that's a discussion best left to theologians.

Possibly due to the influence of works like Bruce Almighty, God has been showing up increasingly often in media recently. Subversions and parodies are also increasingly common (see King of All Cosmos), but limited to Black Comedy - once you've turned God into a joke, it's hard to do anything else.

The danger of being burned at the stake leads to many writers choosing to thinly veil God as a Crystal Dragon Jesus or "The Light". Said God may even refuse the label for personal reasons.

The Maker is often a stand-in for God, if it isn't outright Him.

Also, had you been the first person to edit this article, you'd have seen the phrase "Describe God here." A daunting task, to say the least.

God is featured in or referenced by the following works:

Retrieved from "https://allthetropes.org/w/index.php?title=God&oldid=1884549"
Categories:
Cookies help us deliver our services. By using our services, you agree to our use of cookies.