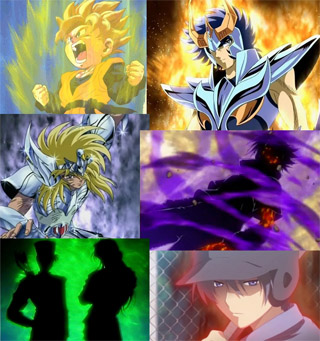 Bask in the glow of their awesomeness... wait a minute...BASEBALL?! [1]

When psyching themselves up for battle, warriors emit a coruscating, Kirlian-like glow around their bodies. These glows are frequently Color-Coded for Your Convenience, with good guys having a blue aura and the bad guys having a red one, although this is by no means a hard-and-fast rule (for example, Shadow the hedgehog's aura in Super Mario Bros Z is black).

Sometimes the battle aura is a metaphor, and sometimes it is visible to bystanders, who take it as a sign to run away or dive for cover. Either way, it is a sign of power, because Power Glows.

In Western Superhero comics, a similar effect known as Kirby Dots is used to indicate great energies at work, though not necessarily related to combat; these are primarily a print technique, but have at times been translated into animation in particularly slavish adaptations.

This is a subtrope of Power Glows, and the supertrope of Animal Battle Aura. Compare Holy Halo and Throat Light. Occasionally manifests as a Sphere of Power or Dramatic Wind. If only certain people can see it you could be looking at Aura Vision. Characters experiencing morality shifts may have their aura experience a Convenient Color Change.

Examples of Battle Aura include:

Retrieved from "https://allthetropes.org/w/index.php?title=Battle_Aura&oldid=1920424"
Categories:
Cookies help us deliver our services. By using our services, you agree to our use of cookies.