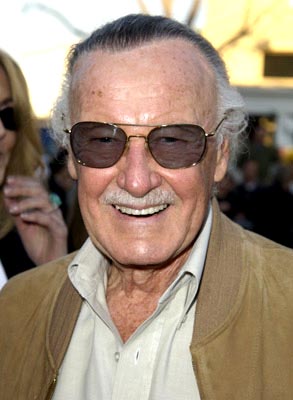 Don't you wish this man was your grandfather?

Stan Lee (born Stanley Martin Lieber) was a Comic Book creator, writer, editor, "Chairman Emeritus" of Marvel Comics and (co-)creator of just about every significant Marvel character who doesn't carry a shield, wear a skull on his chest, or have metal bones. However, how much credit he deserves for creating them -- as opposed to his artist collaborators, especially Jack Kirby and Steve Ditko -- is a matter of debate.

He remained active into the 2010s, both in comics and other media. Among his last projects, he hosted the Reality Show Who Wants to Be a Superhero? and the documentary series Stan Lee's Superhumans, and had a cameo in almost every Marvel movie adaptation. He has got into the Anime and Manga business, and worked on two series, Karakuridouji Ultimo with Shaman King creator, Hiroyuki Takei, and Heroman with Studio BONES. He also worked on The Governator with Arnold Schwarzenegger.

Sadly, he passed away on November 12, 2018, aged 95. Tributes to his legacy poured in from Marvel, DC, and comic book fans from every corner of the globe.

Notable Comic Book characters created by Stan Lee:
Stan Lee provides examples of the following tropes:
Retrieved from "https://allthetropes.org/w/index.php?title=Stan_Lee&oldid=1848830"
Categories:
Cookies help us deliver our services. By using our services, you agree to our use of cookies.