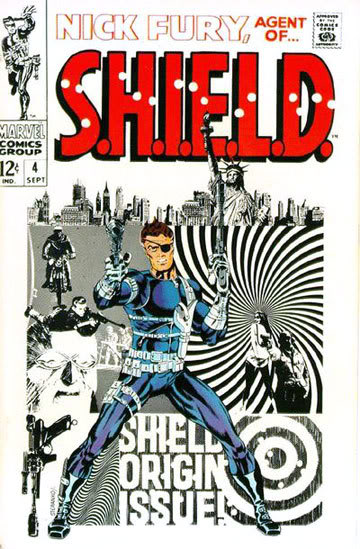 You will never be this badass.

Nick Fury is an immortal superspy. He has been an agent (and later) director of SHIELD, an international security organization. He first appeared in "Sgt. Fury and his Howling Commandos" #1 (May, 1963), created by Stan Lee and Jack Kirby. The Howling Commandos series ran for 120 issues (May, 1963-July, 1974), featuring the World War II adventures of an army unit. In "Fantastic Four" vol. 1 #21 (December, 1963), an older Nick Fury appeared alive and well in the 1960s. He was no longer with the military, instead serving as an agent of the CIA. This version of Fury next appeared in "Strange Tales" #135 (August, 1965), where Fury became the leading agent of SHIELD and the lead of a new series. He has since served as the lead character of several series and magazines. However, the most famous version was the period with Jim Steranko at the helm, that showed arty Surrealism and abstractionism had a place in comics.

The life story of Nicholas Joseph "Nick" Fury is relatively simple. A World War II vet from New York's Hell's Kitchen, Fury started fighting the Nazis with his Band of Brothers the Howling Commandos first before moving onto more esoteric foes of humanity. It was sometime between moving to work for the CIA and fighting a hate-ray powered clone of Adolf Hitler alongside a walking pile of rocks that Fury realized that when the going gets weird, the weird turn pro. A flying base filled with Life Model Decoys and psychic spies was obviously in order.

Just to top that, they decided that his Ultimate Marvel version should be played by Samuel L. Jackson. Literally. They have an official deal and everything, which has now been expanded to a nine movie contract. He's appeared in five of them so far.