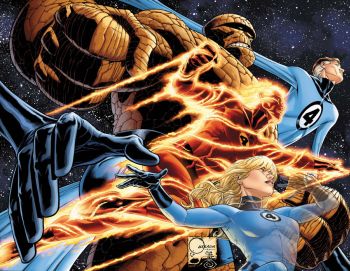 The characters first appeared in "Fantastic Four" vol. 1 #1 (November, 1961), created by Stan Lee and Jack Kirby. The four were connected even before the same Negative Space Wedgie gave them all their powers -- Reed and Sue were sweethearts and eventually got married, Johnny is Sue's younger brother, Ben is Reed's best friend since college (previously Reed's buddy from World War II, until Comic Book Time forced a Retcon) -- and are as much a family (if occasionally a dysfunctional one) as a team.

Reed is the World's Smartest Man, and his genius is often at least as useful as the powers he got from the accident. The royalty payments from all his inventions fund the Four's adventures, despite the fact that they never get implemented in the world around them, and lets them live in high style in the time between.

Their number one recurring enemy is Victor von Doom (Doctor Doom to you), who was at college with Reed and Ben and holds an almighty grudge against Reed for "sabotaging" one of his experiments: the experiment actually failed because of Doom's own error, which Reed noticed and tried to warn him about, but Doom's pride will not permit him to accept the truth. Reed may have Doom (narrowly) beat for the title of World's Smartest Man, but Doom is well ahead for the title of World's Vainest (though he's not the one calling himself "Mr. Fantastic"...). It really didn't help that the experiment in question literally blew up in Doom's face, marring his previously flawless good looks. These days he wears an iron mask at all times, usually as part of a full suit of battle armor.

Their book kickstarted the success of Marvel Comics, and led to Spider-Man, the X-Men, and all the others. It also created many tropes; the FF were the first superheroes without a Secret Identity, the first super-team where the members fought each other as much as the villains, and the first place that Kirby Dots appeared, among others.

The series currently has spun off FF, meaning Future Foundation. Originally a temporary replacement for the regular Fantastic Four book, the Foundation is a scientific organization working for the betterment of mankind. The book features Reed and Sue's children, Franklin and Valeria; and notably includes Spider-Man and Doctor Doom as members.

There have been several TV adaptations of the family, all animated; The Fantastic Four, a 1967 Hanna-Barbera series with many episode plots taken straight from the comics, The Fantastic Four, the 1978 series with H.E.R.B.I.E the Robot in place of the Human Torch, Fantastic Four, a 1990s series that aired along with Iron Man as part of the "Marvel Action Pack", and Fantastic Four: World's Greatest Heroes, a 2006 Animesque French co-production. Ben also appeared in his own show in the late 1970s as part of Fred and Barney Meet The Thing; on that show he was reimagined as a mild-mannered teenager, who had the power to turn back and forth from the comic-book alter ego with the help of a magic ring. ("Thing Ring, do your thing!")

In the mid-'70s, there was even a radio adaptation, which faithfully represented many key early Lee/Kirby plots, and which is notable for being one of the first acting roles for a just-starting-out Bill Murray (who played The Human Torch).

Also see Ultimate Fantastic Four, an (obviously) Ultimate Universe version where the main difference is that the Four are younger and a little less mature. The book lasted until the Ultimatum event, after which Johnny moved to Ultimate Spider-Man and then Ultimate X-Men. And the FF mythos went off the rails completely when a disgruntled Reed became a supervillain.

Tropes used in Fantastic Four (Comic Book) include:
Retrieved from "https://allthetropes.org/w/index.php?title=Fantastic_Four_(Comic_Book)&oldid=1892015"
Categories:
Cookies help us deliver our services. By using our services, you agree to our use of cookies.