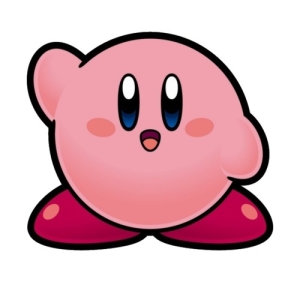 Kirby is a pink blobby creature created by Masahiro Sakurai for Nintendo subsidiary HAL Laboratory and the star of his own series of games. He can fly, jump, suck enemies into his mouth, spit them out, or, starting with the second game, Kirby's Adventure, devour them and absorb their powers -- he takes the old maxim "you are what you eat" quite literally. Throughout most of his adventures, he journeys across the land of Dream Land on the planet Pop Star, squaring off against foes such as the dream-crushing Nightmare, an ominous Body Snatcher called Dark Matter, or the greedy penguin King Dedede.

The Kirby games are designed to be easy for young (or beginner) gamers to complete, but to also provide some extra challenges for experienced players, with one of the earlier challenges being Extra Mode in the first game, Kirby's Dream Land, which adds more enemies to the levels and replaces some of the ones from the normal one with tougher ones, with this mode being unlocked with a button combination on the title screen (available from the start, but the button combination isn't displayed in-game until after beating normal mode).

Besides games, Kirby starred in his own anime series, entitled Kirby: Right Back at Ya! [1]. It was licensed by 4Kids! Entertainment, so of course, a lot of the darker elements from the Japanese version were Bowdlerised out, but the dub, retitled Kirby: Right Back at Ya!, was still successful, managing to stay on the air for all 100 episodes. There is also an unrelated Kirby gag manga serialized by Korokoro Comics that has not been licensed.

Masahiro Sakurai retained a lot of creative input on the show. Kirby has also been featured as a regular character in the Super Smash Bros.. series (also created by Sakurai), and as of Brawl, he is joined by recurring series rivals King Dedede (a large bird wielding a hammer who debuted in the very first game, Kirby's Dream Land, as a villainous character, but later became more of an anti-hero or rival to Kirby) and Meta Knight (an honorable masked swordsman first appearing as an ally of Dedede's in Kirby's Adventure who notably refuses to fight an unarmed opponent).

Most of the Kirby games are Platformers, but the series has occasionally dipped into other genres, as well, as highlighted below:

It should be noted that four of these games (Kirby's Dream Land 2, Kirby's Dream Land 3, Kirby's Star Stacker and Kirby 64) were directed by Shinichi Shimomura instead of series creator Masahiro Sakurai and Sakurai has not directed a Kirby game since Air Ride. Shimomura's titles are slower-paced than their counterparts, and various characters introduced in them (Rick, Kine, Coo, Dark Matter, Adeleine) don't appear with major roles in other games.

Not related to Jack Kirby, or Kirby Morrow. It's also not related to Kirby vacuums, (or the vacuum named Kirby) but you're getting closer[4].

The following tropes are common to many or all entries in the Kirby franchise.
For tropes specific to individual installments, visit their respective work pages.
Retrieved from "https://allthetropes.org/w/index.php?title=Kirby&oldid=1897093"
Categories:
Cookies help us deliver our services. By using our services, you agree to our use of cookies.