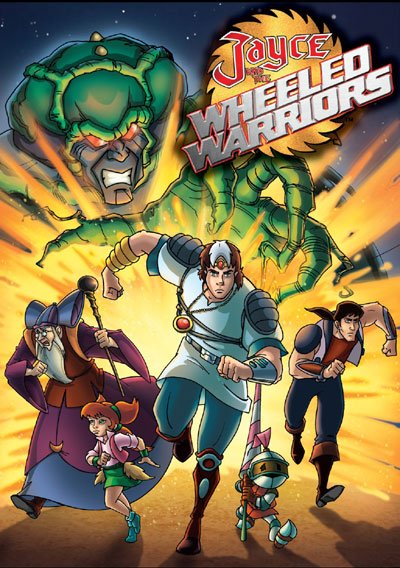 Jayce and the Wheeled Warriors is a French/North American animated TV show which first aired on September 16, 1985. It was produced by DiC Entertainment (originally distributed for syndication by SFM Entertainment), and animated by Japanese animation studios KK C&D Asia, Sunrise, Studio Shaft (Yes, that Studio Shaft), Studio Giants, Studio Look and Swan Production. The show was a Sixty-Five-Episode Cartoon, created to support Mattel's toy line (which was called simply Wheeled Warriors). The show features an ongoing plot; however, like many shows made at the time, it does not have a series finale, and thus the plot was left unresolved. Although a movie was intended to close out the plotlines, it never came to be. J. Michael Straczynski has claimed that his script for the film, completely written, remains with him.

The show featured two dueling forces. The "good guys" are humans, called the Lightning League. They drive white and silver vehicles with assorted weaponry, and are led by Jayce. The "bad guys" are organic green vegetable-based creatures called the Monster Minds, who tend to take the shape of black and green vehicles. They travel via large green organic vines which can grow in and across interstellar space, that sprout seeds that rapidly grow into further Monster Minds. They are led by Saw Boss.

Jayce's father, Audric, is a galactically famous scientist whose greatest project was to produce a miracle crop to end hunger. Unfortunately for him a solar flare released radiation that mutated his plant (and several others around his lab) into evil sentient creatures called the Monster Minds. Audric created a magic root that could destroy the Monster Minds, but was forced to flee before he could join the two halves. He gave one to his servant, a living suit of armor named Oon, to give to Jayce. Jayce and his friends form the Lightning League who travel the galaxy battling the Monster Minds and searching for Audric to unite the root and destroy the Monster Minds once and for all.

The Root is a comprehensive fansite.

Tropes used in Jayce and the Wheeled Warriors include:

Retrieved from "https://allthetropes.org/w/index.php?title=Jayce_and_the_Wheeled_Warriors&oldid=1756401"
Categories:
Cookies help us deliver our services. By using our services, you agree to our use of cookies.