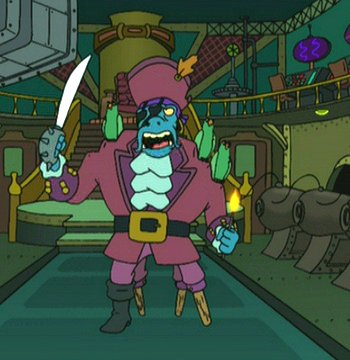 Depending how you view the future, lawlessness will always be present in society. There's always going to be a shadier, nastier way of doing business, and that will almost certainly follow humanity to the stars. Thus, sci-fi authors will include Expies of modern and historic un/organized crime—be they space mafia, gangs, or—in our case--pirates.

It's not as anachronistic as it might seem. After all, pirates themselves [1] have made a Real Life comeback in Somalia and South East Asia, and it's a lucrative enough "business" that it's taken a multinational military response to fight back. Surely an established society in outer space with significant trade and commerce would suffer similar problems!

... Well, maybe. The major problem with space pirates preying on space commerce is that space is vast. The challenge of catching commercial shipping in open space is orders of magnitudes more difficult than catching them on the open seas. Sometimes, this is cleverly worked around and justified. Most of the time, however, it isn't.

As with Pirates in general, there are two kinds of Space Pirates in science fiction:

Examples of Space Pirates include:

Retrieved from "https://allthetropes.org/w/index.php?title=Space_Pirates&oldid=1776930"
Categories:
Cookies help us deliver our services. By using our services, you agree to our use of cookies.